Once in a Lifetime Day

Let's back up a moment to Thursday, shall we?
Oddest. Day. Ever.
Hubby and I laid in bed at the end of the day and were in awe of all the things that occurred. He even said, "A day like this will never happen again." Because it's just not possible. We could try to repeat it, and it couldn't happen.
Backing up to earlier in the week, you might recall that I had taken two days off of work for Vegas and the beginning of school. I was less than eager to request yet another day off of work for my sister-in-law's funeral, but a few things made me change my mind. First, I found out that my lovely mother-in-law had flown in, and then I realized that Thursday was also C's birthday. How could I possibly stay home alone while everyone was together up north? That scenario would have included both tears and a bottle of red wine. Not a happy combination. So I grew a pair and asked my boss if he could live without me for one day. He decided he could, and if it would have been appropriate, I would have kissed him. (It's not, so I didn't.)
Wednesday night the fam picked me up at work and we were off. We made it up to my parent's place and crashed into bed. Thus begins the Thursday of all Thursdays.
After getting everyone ready and decent, we arrived at the cemetery for Rose's burial. The kid's weren't exactly comfortable with the whole scenario, especially C. He confessed at one point that he was scared. I thought it was because of this. 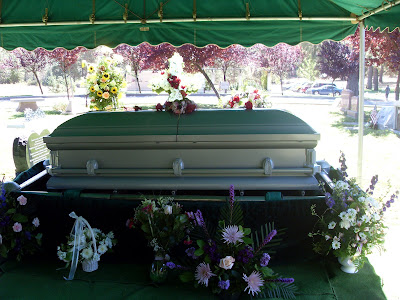 But it turns out he was just nervous about all of the strange people that he didn't recognize. No, he does not like crowds of strangers -- kind of like his mom. We were happy to see Hubby's brother, mom and nephew, all of whom we love very much and don't get to see enough of. There were lots of hugs to go around, and it was incredible to see my great-nephews who have grown so much over the last five years. (Yup, I'm a great-aunt. But I don't know that I'm a great aunt.)
The priest did a very nice and simple service. All the usual Catholic niceties were said, a little holy water was thrown, and we recited the Lord's prayer. What came after that was a tad unexpected. You see, Rose came from a large family that is mostly congregated in Texas, but most of them couldn't make it out for the funeral. One cousin that she was close to did fly out, and had a little something to share with the rest of us. It seems Rose had another cousin, Peppita, who has visits in her dreams...from...dead people. Yes.
You can see where this is going.
Peppita was "visited" by Rose for two nights, and emailed the other cousin, who had a message to read for Hubby's brother and the rest of us. The good news is that Rose is doing well, and while she misses him and us, she's finally at peace but will be visiting. Interestingly, none of what she "said" sounded anything like her. I would have expected a little more sass and humor, which she was full of. "A Pistol" they called her, and they're right. I guess when you cross over, you only speak poetically. Who knew?
After the service, my parents were wonderful and took the kids back to their house. They'd been very good during the service, but were wandering aimlessly afterwards. I was very proud of how they handled themselves, and was glad they could go back to Gramma's house to relax. We stuck around a bit longer, where all of us gathered over at Hubby's dad's plot. 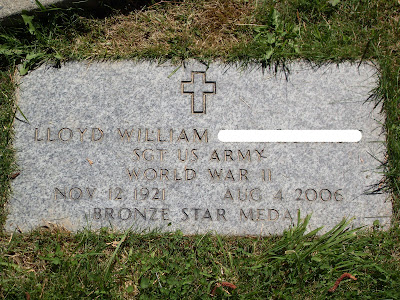 We've spent a little too much time at this cemetery over the last 10 years. Right next to Rose's plot is her sister -- I thought it was lovely of Hubby's brother to put them next to one another. 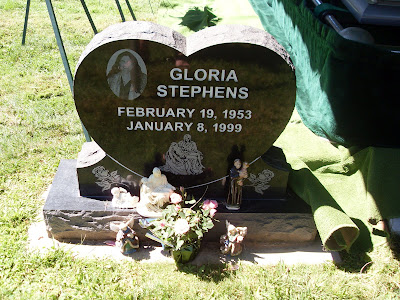 And now it was time for the switch. We had to leave "funeral mode" and cross into "birthday mode." Back at the 'rents house we changed into summer clothing, lounged for a little while, and then made plans to meet some family over at a pizza parlor. It was quite a crowd, including us, my parents, Hubby's mom, Hubby's brother, Hubby's nephew and his wife and three sons. These happen to be my favorite in-laws, and it was fantastic getting a visit with them. My nephew (who happens to be four years older than me!) and his wife are wonderful people, and they have raised themselves three fantastic boys that I wish we saw more of. They live all the way out in NC, so it's not often we can get together. What were the odds that we'd be together to celebrate C's birthday?
I had stopped at the store to pick up a cake and candles, and of course there were presents. C had a wonderful time, and said afterwards, "This birthday rocked!" Yay -- success! 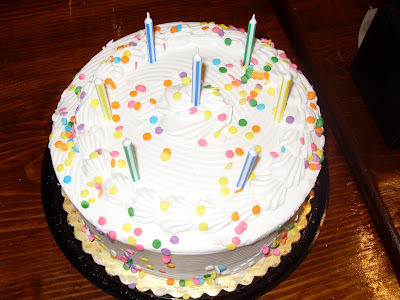 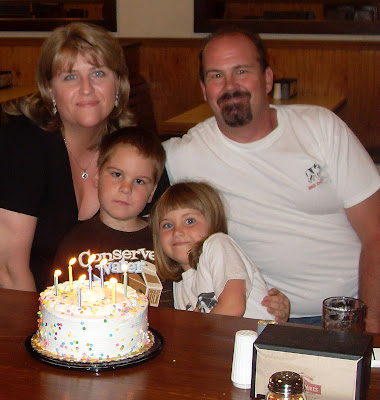 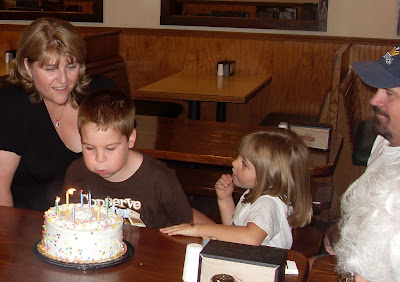 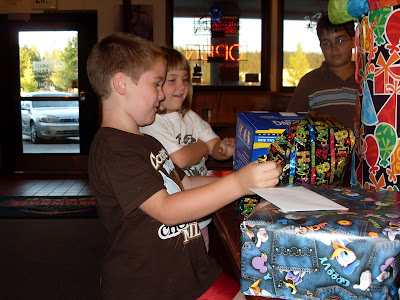 We ended the night with a walk through the Farmer's Market/Street Fair, where I bought a beautiful necklace and enjoyed as much time with these folks as I could. 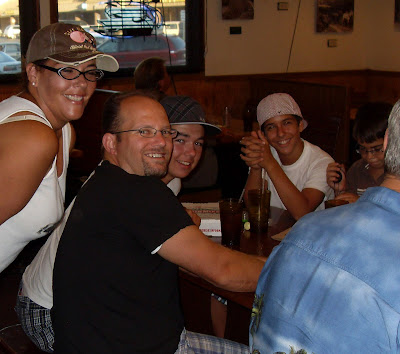 And that, my friends, is why it was un-repeatable day. Family, a funeral, and a birthday. I could have done without one, but I'll take the rest any day of the week. 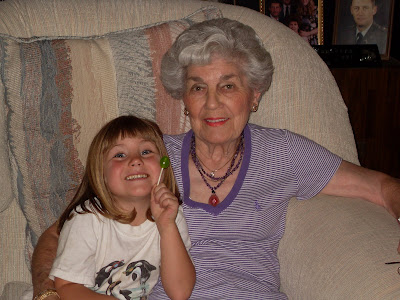 That is a crazy day, one I am sure you all won't forget. Happy B-day C!

Holy moly, I don't know how you did that - kudos to you!

That is really strange. It sounds like everyone handled the day very well. Sorry about your SIL, and Happy Birthday C!

Hmmm. Rose will be visiting? Do you think she'd like to go to Bunco with us? I bet she'd have fun.

What an odd thing to say at a funeral. I hope the family was not upset by her comments.