9 Years and a Day Late

The last couple of days have been rather crummy, thanks to some disagreements with my husband. Something that he did to upset me on Wednesday, led to me pretty much shutting him out of my world on Thursday, which also happened to be our 9th Anniversary. In the end, we both acted like jerks at one time or another, and we both apologized. (A day late -- anniversary ruined.) I had written a lovely blog about our wedding day, but in my anger, deleted it. But no, I'm not one of those crazy people who acts irrationally when upset. Not. At. All.

What can be said about nine years married to this guy? It has had its ups and downs, and I've grown up plenty since 23. In the end, I don't have more fun with anyone else, and I really respect his views on the world. He's also the most decent person I've ever known. If something needs doing, it just gets done. There's no whining, no putting off, no excuses. Our lawns get mowed, our cars get serviced, the Christmas lights come down quickly -- you'll never hear me say, "I can't believe he hasn't (fill in the blank) yet!" If he was a redneck, his motto would be, "Git r done." I appreciate the heck out of that, and I try to tell him often.

Wow, he was just now reading my blog, and was amused by the "he's worth keeping around for his bbq abilities" comment a few posts ago. He so rarely reads me -- nice to know he's caught up. 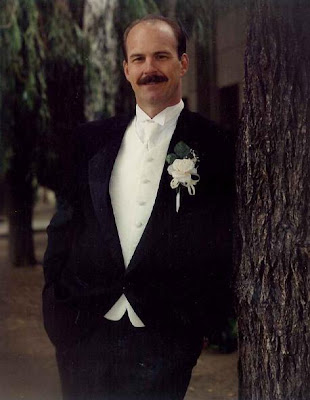 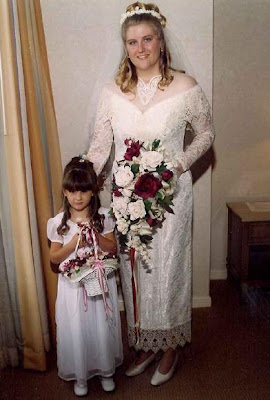 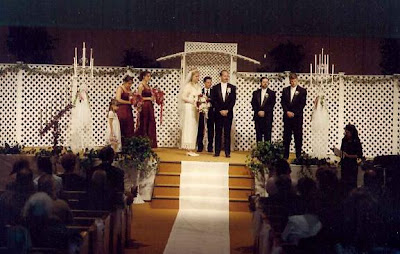 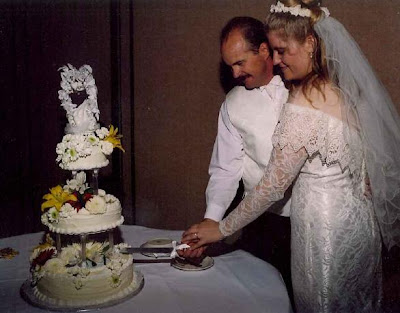 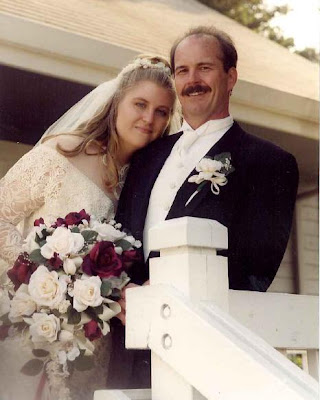 Merrie, just post embarrassing pictures of him when he makes you mad--that will teach him!

Happy Anniversary and I love that last pic! Especially your bouquet--so pretty!

Happy Anniversary to you as well, Sorry it wasn't how you lanned it but you will have plenty more to make better! I LOVE the last picture of you both, so nice!

Sorry to hear that your actual day wasn't what you hoped, but Happy Anniversary anyway.