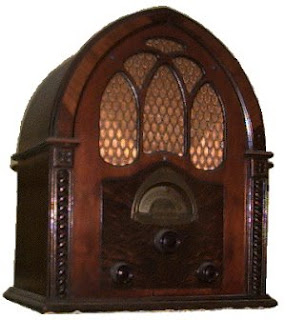 I've had surprising luck with radio contests the last few years. Perhaps it's because I'm in my car at least two hours out of every day, and during my commute, there isn't much else to do! The items I've won haven't been too terribly amazing. No $10,000 jackpots to speak of. But I'll take what I can get when it comes to anything free. (Lots of extra money <--- we don't have.)

The two stations that I listen to most frequently are Live 105 and Mix 106.5 here in the bay area. One is more alternative and one is a mix of a little of this and a little of that. If I'm not listening to my iPod, I'm listening to one of them.

The first contest was part of a bigger one, two years ago in October. 106.5 was drawing names every day of people who would win $100 gift cards to a local mall (that I love), and at the end, they'd take all the names of the gift cards and have one big drawing for $10,000 gift cards and a trip to Vegas. On my way to work the day before Halloween 2006, they actually called my name! I won a $100 gift card, was entered into the drawing, and had my last name mocked because it reminded them of Lord Farquaad in Shrek. When the day of the drawing came, my family of four gathered at the mall for the announcement, and I even had to be packed and ready to go to Vegas in case I won. (I was going to bring my son since we didn't have anyone to watch the kids.) I didn't win, and I don't know who was more disappointed -- me or my son! He really thought we would win.

Contest #2 wasn't early last year. 106.5 had tickets to Gwen Stefani to give away, and I was dying to go. I was listening at work when they played one of her songs, and I was the lucky caller! It wasn't as easy as that, though -- they wanted the contestant to get their grandmother to bark like a dog. I realize this sounds ridiculous, but it felt amusing at the time. I explained that I had no grandmothers left, but I'd be happy to try my husband. They agreed, and we called my Hubby. I simply said to him, "Honey, what does our husky Simba do when he wants to be taken for a walk?" Without skipping a beat, my husband said, "Wooo woo wooo wooo!" I won! Despite his assistance, he had no interest in attending the concert, so I took my best friend Debbie. Even though the seats were lawn, we had a fabulous time, and it was a memory I'll always cherish. Oh, and I also won the Sweet Escape CD with the tickets. Gwen rocks.

Contest #3 as also last year during the summer. I called in to 106.5 to win four tickets to the circus. In order to win, I had to tell them what the main clown's name meant in Italian. I guessed Bello meant 'beautiful' since that's what Bella means. I was right! Our seats were AMAZING -- right out front and near everything. The kids had a wonderful time, though we were stupefied by how much $$ we spent on food and goodies. Yikes.

Contest #4 was just a few weekends ago. I was driving to Safeway early on Saturday morning with my daughter, and Live 105 announced a giveaway of U2 Cd's. I guess the first 3 have been remastered and re-released, so they were giving away all three. I called in and won! Since I own every one of their albums except those three, I was pretty happy.

Contest #5 was actually this last Monday, the 8th. 106.5 announced that caller seven would win four tickets to Disney on Ice -- I won! The DJ actually mentioned that she recognized my name. Ha! I don't know which show we'll be seeing, and it isn't until October, but I know we'll have a good time.

How lucky is that? Now to set my sights on winning a large sum of money or an amazing trip somewhere. That would be pretty sweet.
on 9/10/2008

I think you should dabble in the Lottery while you're at it!

--no wait, you'll win and move away, NEVERMIND!

Here's a promise:
If I should ever win big in the lottery, I promise to keep my house in H...even if it's a 2nd home. ;)

Whoa - you sure are lucky! You also spend a lot of time calling in to radio stations ;-)

LOL! You made your hubby bark like a dog on the radio! That makes my day!