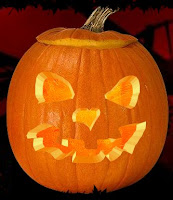 Nearly every year of Halloween holds fond memories for me, but one in particular came up in conversation with my husband a few nights ago -- that's the year I'm sharing.

The conversation was prompted by our watching the movie "Zodiac" about the Zodiac killer. He was ten years old the year that the murders started happening in the bay area, which was just before Halloween 1969. That year his father, and probably every other father around, insisted on taking he and his brother trick-or-treating. Hubby recalls everyone being afraid, and after having seen the movie, I can't say I blame them.

In 1986, we were newly retired and living in a suburb of Novato, CA. Because the school near us was full, I was being bussed to another school located further away, and hadn't had the opportunity to make friends with anyone that lived near me. This meant trick-or-treating wasn't going to be much fun for me. During the three years before we'd lived on an Air Force Base, which was a safe haven for kids, making trick-or-treating there easy and fun. I was feeling sad about missing out on that comfortable environment.

Much to my surprise, my parents must have come up with a plan of action together, because it was decided that my Dad would take me back to the base for Oct 31! There I was, 11 years old, and I went door to door with my Dad -- and what I recall is that I enjoyed every minute of it. I don't know that we saw a lot of old friends, since people move pretty regularly in the military, but it was still familiar and it felt like going home. Eventually we had to head back to our own town, where I was even allowed to do a little more candy collecting, before we finally called it a night.

That's a favorite memory I have of Halloween and of my Dad.

I remember watching that Zodiac movie and it was scary..

Aw, thats a great memory of you and your dad..

What a sweet memory..I bet it felt great to be in yor familiar, comfortable area....

that was sweet! except for the zodiac killer part, scary!

I havent seen the Zodiac movie, but I remember thinking that it looked good. Ill have to add it to my list of Movies To See.

Great memory! Halloween is awesome on military bases isn't it? I lived on an AFB after I got married and loved Halloween. It was one big party and so much fun!

Dads are the best!
And I watched an older version of Zodiac or perhaps one that wasn't as popular with that guy from Grey's Anatomy as the lead actor just the other night. No thanks.

Dads ARE the best to trick or treat with. I'm glad you have this special memory with your Dad!!