Yesterday was a good day in our extended family. We attended the wedding of one of my cousins, who finally married the girl that we've all known and loved for seven years. It was just a formality, really -- we've considered her family for a long time.

I was starting to write about how difficult my children were that day, specifically my son and his antics before and during the wedding, but I'm starting to realize the cause behind it, and with that comes more sympathy than I had yesterday. Part of it is that he is not a fan of crowds and strangers, so walking into a garden FULL of strangers what not high on his list of things to do that day. I need to start remembering that in advance so as to either help put his mind at ease, or just avoid certain situations altogether. Sometimes that's possible, sometimes not. In the end, he sat with us during the wedding, and perked up when it was time to go to the reception.

But first, the wedding!

I don't want to go posting a million pictures of people who haven't given me permission, so I'll just do it to the people that I know won't mind or will forgive me.

Here first is the bridesmaid of the wedding -- the groom's sister and my beautiful cousin. She was my Matron of Honor nine years ago, and she looks exactly the same now as she did back then. You can hate her just a little if you want to. 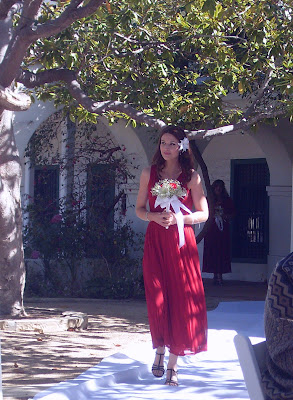 The bride and groom looked so happy and were all smiles through the ceremony. They went the way of the unity sand instead of candle, which I think is smart for outside. It was a really sweet moment when, after pouring the "foundation" of the sand, their mothers hugged and kissed both of them. My daughter was sitting on the aisle, so I kept handing her my camera to take pictures. She took this one of the Mom moment. 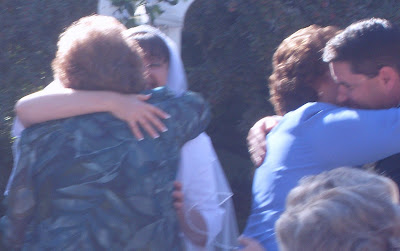 She also took this one of the Bride and Groom. 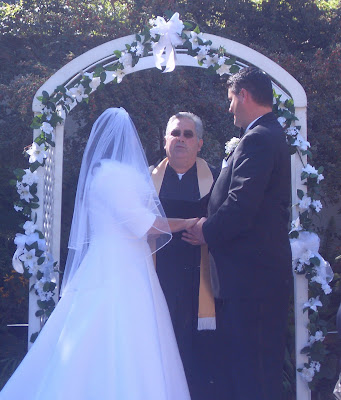 Once the ceremony was over, my little branch of the family got together to visit, and some great pictures followed. Here's my handsome brother and my beautiful mom. 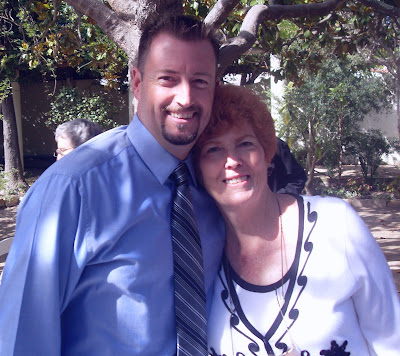 And this is a rare one -- my brother, my mom, my dad and me! We rarely think to take one of the four of us. I'm so glad we did, if for no other reason than I don't look freakishly tall! 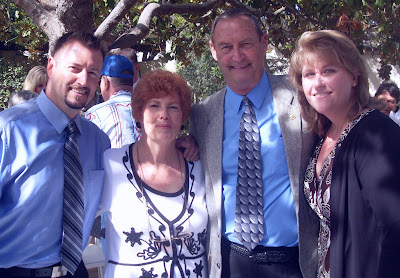 Tomorrow: Part 2 -- The Reception!
You definitely don't want to miss out on the video of everyone dancing to YMCA. That's they kind of thing you can't make up.
on 10/06/2008

oh yeah I hate her!Looks like you had fun.

Looks like a beautiful wedding! Isn't it great when the weather cooperates!

Lovely! I'm glad you thought to take the family pic. Those are always nice to have.