The 5th Member of Our Family

Kat from Mama's Losin' It has a weekly Writer's Workshop that sometimes I take part in. Here's this week's contribution. (That I would have posted yesterday, if not for the Sallie Mae incident.)

My husband and I both grew up with dogs in the family, but when we got married, we both happened to only have cats. So for a lot of years we were cat people, and that was actually a lot easier when the kids were little and more high maintenance. Finally, back in 2007, we started talking dogs. We knew we wanted one that was family oriented, not a puppy and definitely housebroken. Having friends whose daughter received a serious bite on the face from a neighbor's dog several years back, we knew we wanted to be extra careful in our choice, and hopefully avoid any such incident in our lives.

I started searching on petfinder.com where you can select whatever criteria you want in your search for a pet. It didn't take long for me to find this guy. 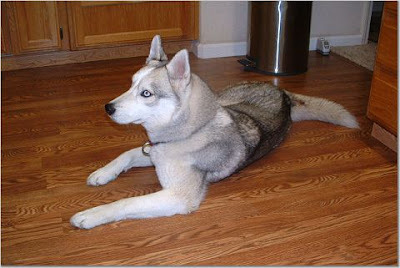 He was listed through a group called BASHR, which is Bay Area Siberian Husky Rescue. Not knowing anything about Huskies, I decided to do a little research. I found certain accurate facts, like how they love to run (without any sense of how to get back, therefore use a leash), some like to dig, none of them like cats and they're usually very quiet. Now that we know a lot of huskies, we can tell you that these descriptions are all accurate, but vary dog to dog.

Unfortunately, there was one site I found that actually suggested that their hunting instincts may cause them to attack small infants, and even told a story of a family whose Husky attacked and killed their baby. What?!? Um, how about a nice turtle, instead?

Thankfully, we decided to continue looking into Simba, and I contacted his foster dad. This wonderful man, who has two Huskies of his own and fosters others when needed, answered every single question and concern I had, and THEN some. Not only that, but he was glad I had so many questions, which never happens to me. Anyway, it was arranged that we would come and meet Simba on Memorial Day weekend of that year, and off we went.

At the man's house, we were immediately greeted by three very curious and friendly Huskies. We knew right away which one was Simba thanks to the beautiful blue eyes that only he had. 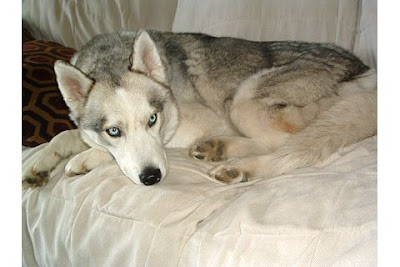 We all sat and visited for a while, and it didn't take long for us to decide we needed to take him home. He hopped willingly into our van and we took off. The funny moment of that day was when we stopped to pick up some cold drinks at a convenience store. I waited in the van with Simba, who was looking out the window, and I overheard a man tell his wife, "That's a wolf!" Nope, not even close, even if they look a little similar.

Once we were home, Simba seemed to fit right into our lives, as if he was always meant to be there. At first we were very careful not to let him be alone with the kids, but we slowly came to realize that even when they were hardest on him, he was patient beyond belief. They've laid on him, poked and prodded him, chased him all over and even bit him on the ear. (If you've seen "Snow Dogs" you know why.) He's endured it all with a grace I'll never understand. He might give a yip and run for it, but never once has he behaved badly, and for that I think he deserves a medal. 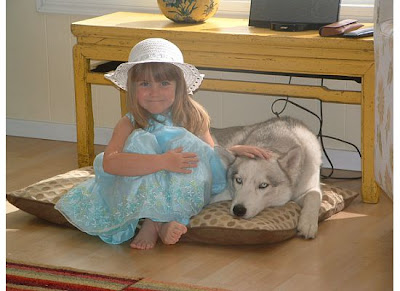 Our Husky does have his quirks. He doesn't dig, doesn't like cats, but he will run like the wind without ever looking back, and has done so the few times he's broken out of the yard. Thanks to his tags, the three times he's taken off without our knowing, we've received a call from three nice families nearby that had him. Whoever had him when he was a puppy raised him right -- he's extremely well mannered and wouldn't dream of touching food on our plates. He does, however, have quite a howl. He's one of the not so quiet ones that likes to talk about things. Like when he's hungry, thirsty, needs a walk or just wants a little attention. "Wooo wooo wooo" is what we get. It's quite amusing, though it can get tiresome if we're trying to have a conversation at the same time, and for some reason he howls at my dad more than anyone. Perhaps he just reaaaally wants my dad to like him. We'll never know.

And THAT, bloggers, is how we came to be family with the coolest dog around. 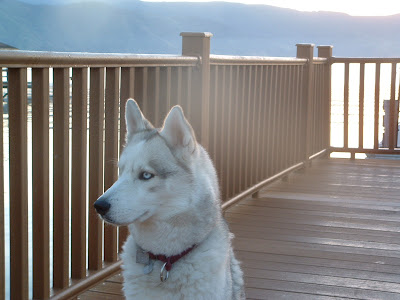 What a beautiful dog!!!

He is gorgeous! I hope that someday Zipper will be a really good dog. He's a good puppy now, but he definitely has some behaviors that we're praying he'll grow out of.

He is beautiful. I want another dog, but we are waiting for a bigger house. Hopefully that will happen this year

I wish we could take credit for Simba's amazing manners, but whoever had him first did right by him.

Seeing his pictures and reading your story makes me want to run out and get a husky like, tomorrow. And I'm really not even a dog person.

Awwww, huskies are the best! As mine have gotten older they have outgrown the whole digging thing (almost). But you should've seen the yard where we lived when they were puppies--holes everywhere!