When I was about six or seven years old one of my favorite possessions was my Big Wheel. We took it with us all the way to Germany, and I remember riding it all over the place in front of our giant apartment building. I didn't get a bike until we moved back to the states, so this was my one and only "mode of transportation."

And then, one day, along came my brother Burke. 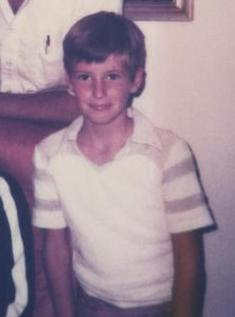 Let me tell you a little about this guy. Since somewhere around birth it was clear that he had the gift of a true salesmen. He could tell you something -- CONVINCE you of something -- making you believe that he felt it with his whole heart. He would get an idea in his head, approach you with it, and never give up until he wore you down into agreement with whatever scheme he had cooked up. And somewhere along the way you started to agree with his backwards logic. Until Mom found out, anyway.

Shall I share some examples? As if you have a say...

Exhibit A! I don't even remember this, but the story has been handed down by the guilty party himself. When I was about three my uncle gave me a gorgeous brown teddy bear as a gift, possibly for Christmas, and for some reason Burke, who is five years older than me, really loved it. HAD to have it. It seems he managed to get his hands on it while my uncle was still there, and my uncle made him give it back to me. Fast forward to the next family get together where we took an extended family portrait, and guess whose holding the bear in those pictures? Not me! My uncle was again not happy, but Burke explained that we'd made some kind of fair trade. I probably ended up with a stick of gum, but whatever.

Exhibit B! Advent Calendars. We all enjoyed them as a kid, and I assure you I was faithful about only opening one each day, as this kind of thing fulfilled in me the desire to make the things I covet last as long as possible. That's right, I coveted chocolate. And sometimes I still do. Take that. One year, when I was nine or ten, I suddenly had Burke all up in my grill with the great idea that we I should eat all the chocolate out of mine. I hated the idea, but somehow his "logic" that, since he'd eaten every piece of his, we might as well do the same with mine, won. He helped me polish it all off, naturally, and in the end I was as sad as could be. Especially when Mom found out and had absolutely no sympathy for my plight. Apparently I "should have said no." Yeah, well, apparently she hasn't been swindled by this guy yet.

At last we come to Exhibit C -- the Big Wheel story.

One day, as I was going about my business and sitting on a grassy hill outside, I was approached by my brother and some of his clever friends. They had a "Great Idea!" They were absolutely certain that they could make a fantastic go-cart for ALL of us to enjoy, and of course they were going to let me have lots and lots of turns, but to create this wonderful go-cart they were going to need parts from my beloved Big Wheel. How did I feel about them taking it apart? Naturally I said no at first. This didn't sound like such a great idea to me, and I was happy enough with it the way it was.

What do you suppose happened?

He wore me down. My Big Wheel was taken apart. They got bored/tired really quick and gave up when things didn't go the way they thought. And there I was.

My heart was broken.

And do you suppose there was even an ounce of sympathy from my parents? Nope. Because (you can say it with me) I should have said no.

Years later, when Charlie was a baby, this story came up during a family dinner, and I finally had the chance to say my piece. I told everyone how disappointed and let down I had been, and I really laid into my parents about how it killed me to have them not care, when clearly I had been bamboozled by their son.

I didn't realize at the time how hard they took that news, until the following Christmas, when guess what I found under the tree from my parents? 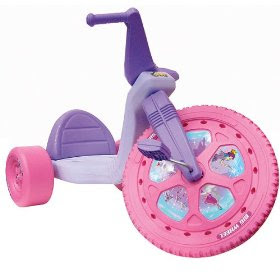 How cute are they? We laughed for hours that Christmas day, and it's a memory I'll treasure forever.

Of course, I couldn't actually ride it, so guess who we saved it for? 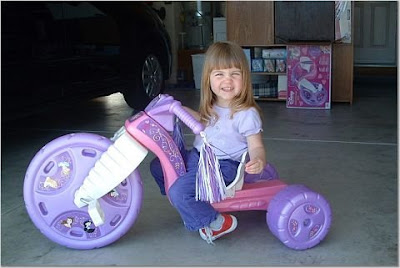 Meanwhile, Burke has turned out to be a decent, wonderful and upstanding man who I'm proud to call my brother. He's still one heck of a sales guy, which is part of his current job, and they do love him there. Thankfully he leaves that stuff at the door and is just a great son, brother and uncle with us. 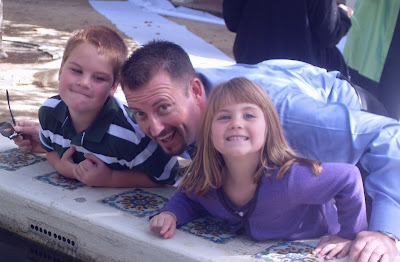 Oh I so loved my big wheel! This brought back so many memories for me :) I need to find a couple of those for our boys!

Such a cute pic of her on the Big Wheel! Good idea saving it too...very clever!!

You daughter is a cutie! I had a great time in San Antonio - kind of a tourist trap but I didn't mind a bit! I was on vacation! How do you get your blog to look so fancy? I need a new layout but have no idea how to do anything!!!

When I was little my brother ran over me with his bike. Yes, HE RAN OVER ME. Of course, his defense is that I wouldn't move out of the way. Like that's an excuse to mow down a little girl. Sigh, thank goodness I have lots of forgiveness in my heart.

Just make sure Burke stays away from the big wheel! ok since he is adorable, I will forgive him for being so mean to you Merrie:0)