We have this neighbor. Doesn't everyone have at least one of these? We've gotten very lucky with most of our court, making good friends that I hope will never move. But this one neighbor...
When he first moved in we quickly learned just how loud his dog, who it turned out lived full time in the side yard next to our bedroom, liked to bark. All the time. Constantly. And of course they never let him out. His sad little life consisted of barking at anything that moved through the thin slats of his fence.
We also learned about his teenage son, whose favorite habit was to smoke in the side yard, and then flick the butts over the fence into our side yard. For whatever reason, we took the non-confrontational road and simply flicked the butts back over the fence every chance we got.
The highlight of this relationship has always been that he's a junk hauler, and for the first four years he lived here, he drove a giant dump truck with an extended hauler attached, and would pretty much always park it directly in front of our house. What a view! We were happy when he finally got rid of it and invested in a gigantic diesel engine monster that can fit in his driveway. The kicker is that he's always the first person to call the police if any vehicle is parked in front of his house for too long. Schmuck.
Normally we have nothing to do with this guy, but out of the blue he wanted to chat with Rick about something recently. It seems something in our yard is bothering him. 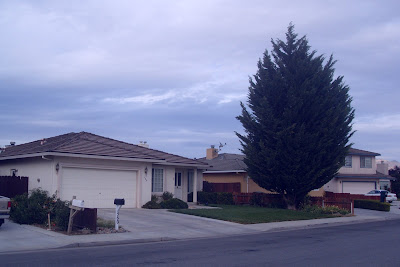 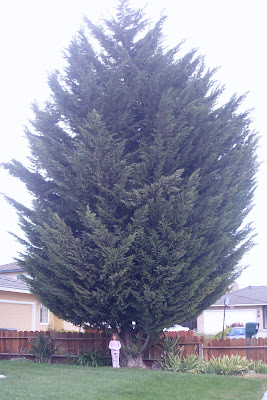 Yes, it's HUGE, and we know that. It's a tree that we love and that we hate for several reasons. Personally, I love it for how beautiful and healthy and strong it is. Just look at the width of the trunk! 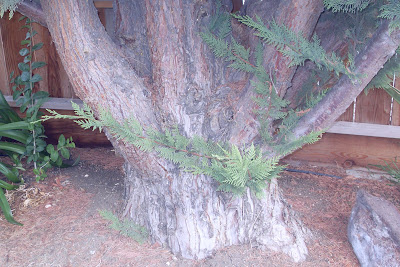 The downside is that there are these obnoxious black birds that live and multiply in it every year, making it impossible to go outside without being either assaulted or deafened. Everyone notices them and comments, but thankfully nobody seems to think it's our fault. It also apparently makes an a very thick and sticky sap, but nobody blames us for that, either.
Well...almost nobody.
It turns out our favorite neighbor doesn't care for the sap that tends to fall on his giant monster truck whenever he parks directly beneath it. Just a thought...don't park directly beneath it? He suggested that we should have it taken down. Really? A healthy tree that could use some trimming again, but otherwise poses no threat to anyone, should be taken down? And at our cost? You can imagine how quickly we acted on that one.
For now, we hope to hang on to the tree as long as it's safe to keep. And hopefully the neighbor will keep to himself and park on the other side of his driveway. That will certainly make this little girl very happy. 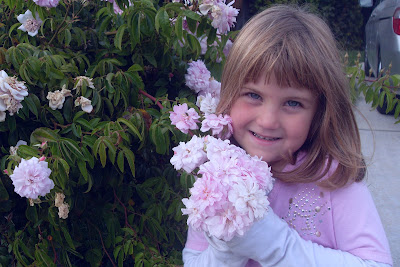 It was so sad when we moved and the new owners of our house took down that big, well HUGE, Holly tree. People are weird sometimes!

OMG! Your neighbor sounds awful! But I love your tree, too!

People amaze me. It's a tree! Tell your neighbor to deal with it. Or make a deal.......you cut down the tree if he kills his dog and son!

You totally called that one...Schmuck.

That word is really underused isn't it? Perfect for describing a variety of people though - your neighbor included.

That is an awesome tree! And so is that pic of your little girl! Such a cutie!