I don't know about the rest of you, but I always look forward to Oscar night at my house. We don't have a party or eat fancy foods, and if I'm lucky my husband watches at least some of it with me, but I still get a kick out of the anticipation that comes with not knowing how it will turn out. Sometimes you get a great host, and sometimes you get a not so great host. Sometimes you get great writers, and other times...not so much.

This year had the best of EVERYthing, in my opinion, and largely thanks to this guy. 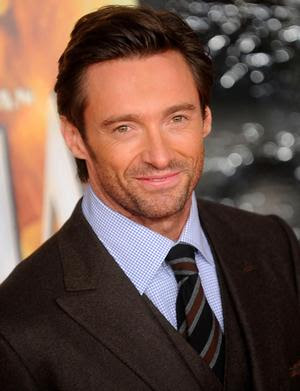 I had forgotten that he's a lover of all things musical, and has even performed on Broadway, if I remember correctly. That memory clicked in the second he started the opening song, which was so much fun! My kids watched with me, and right at the end, when he closed with "I'm Wolverine!", I absolutely cracked up. When I rewound to show Charlie, he was thrilled that this guy was actually Wolverine, his favorite X-Man. Mine too, son...mine too.
The entire show was excellent! I loved the set and how they arranged a clever background for each award. I loved the setup of having five former winners present the best actor/actress awards in such a personal and lovely way. I loved that they had Queen Latifah sing such a beloved song during the memoriam, during which I managed to keep it together until Paul Newman. He's held a special place in my heart ever since I saw "Butch Cassidy and the Sundance Kid" as a young girl. A lot of that movie went over my head, but the bicycle scene was a favorite.
As the blog world has blended in with my own reality, I couldn't help but think of Happy Hour Sue every time I saw Robert Pattison. First when he was presenting, and then when he was sitting behind...um...I don't even remember. Isn't that awful? He was behind a nominee and looked great, and all I could think was, "Sue is so happy right now." 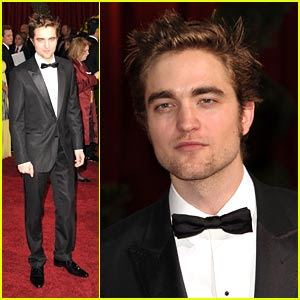 * Anne Hathaway dancing and singing with our Wolv-- er, Hugh.

* Ben Stiller and his spot on impression of the current Joaquin Phoenix. (Who I hope we have back once this documentary business is over. I HAVE to hold on to that story.)

I'm secretly glad that Brad Pitt did not win, and I was pretty disgusted that they kept zooming in on he and Angelina home wrecker while Jennifer Aniston was on stage presenting. At what point does that stop being the only thing that can be connected with Jennifer? What about zooming in on one of her co-stars or a friend? I just thought that was tasteless.

And now back to the reality of a Monday. There should be an award for getting out of bed every week and facing it. And it should be filled with chocolate.

LOL I was happy. SO happy. (in fact to see my actual tweets go to Jen's blog www.dailymishmash.com)

I agree about cutting to Brangelina: Jesus, ABC, way to get in the mix. Acting like a 9th grader.

yeah I agree, I couldn't believe that is who the decide to cut away to while jen was talking. oh Edward was behind Mickey Rourke, not that I noticed or anything!

THAT was it -- thank you Jamey! I can't believe I couldn't remember that. Apparently Robert shines through and that is that.

I thought Hugh Jackman was a great host as well! I loved the song and dance numbers...much more than the often un-funny comedians.

And I agree about Jennifer-Brad-Angelina as well. (Team Jennifer)

I don't agree with what they did while Jennifer was presenting either! SO HORRIBLE! Not an Angelina homewrecker fan either...Loved Heath's family!

Amen on the chocolate award. All the wrong people get the big fancy awards with the bag o' outrageous swag to go along with it. Based solely on the number of diapers I've changed in my lifetime, I'm so deserving. Not to mention my table wiping or sweeping skills. Talk about a performance!