Our April Fools Day turned out alright in the end. My son ended up leaving school early thanks to his less than happy attitude first thing in the morning. We decided a mental health day was the best choice for everyone involved, so he and I hung out at home. That evening, we took my cousin Dawn's idea and spun it into a fun outing.

At her house they switch dinner and dessert, making "dinner" the treat, followed by "dessert," which is the healthier meal. We took the kids to see "Monsters vs. Aliens" and treated them to popcorn and candy for "dinner." Afterwards nobody felt particularly hungry, so we dined on fresh strawberries and took it easy.

Noelle was a day late in her April Fools jokes. Last night, on the 2nd, she told me a story about how Daddy had bought her a big chocolate bar, which she had left on the table, and Simba and grabbed it and eaten it! She was so believable that all I could think about was a) Simba never does that!, and b) what kind of chocolate?? Even after she smiled and said "April Fools!", I still wondered about the chocolate...

Now, about Monsters vs. Aliens.

Seriously -- I've truly become a fan of Seth Rogen, and his voice as Bob was spot on hilarious. I didn't really care to see this movie prior to going, but now that I have, I do recommend it. Take your family and laugh this weekend. The tribute to "Close Encounters of the Third Kind" is worth it alone. 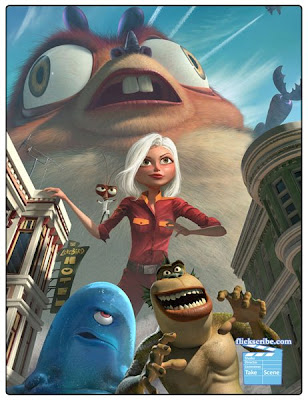 Glad you liked our idea! I had my share of April Fools jokes that I played on the kids... they never got me though! But I have heard some ideas they have so next year I better be on my toes.

I am more interested in M v A because of your review. I thought the previews were a bit on the lame side... Now I am thinking it will be a great outing for us as well.

Happy Weekend to ya!