If you haven't already, don't miss a chance to enter my first Giveaway!

I came home from work last night, exhausted from a busy day at work, and the first words I heard as I was cozying up in Rick's arms were from Noelle: "Charlie, look...a shell!!" The kids went running into the backyard, and I heard them getting all excited about something. I immediately got up and headed in that direction, because whatever they found was now in serious danger of being loved on to death by my children.

I sincerely didn't know what to expect.

I most definitely did not expect this. 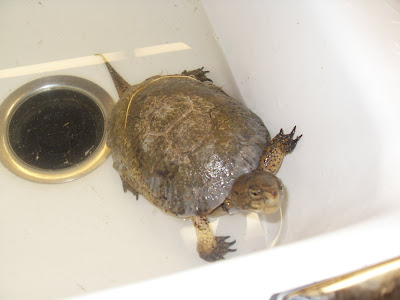 We live in a suburb of a small town in the Bay Area. NOT near any ponds or creeks, nor do we have any fancy neighbors with ponds in their back yards. At least, not that we know of.

Therefore, we were a bit surprised by the appearance of this little guy. (Or girl, as Noelle has been prompt to point out. Sorry...I didn't mean to offend anyone.)

At first he (for the sake of simplicity, I'm sticking with "he") wouldn't come out of his shell, so I put him in a tupperware dish with some water in it. Within about five minutes he'd decided to make a break for it and was climbing out of the tupperware. Time for Plan B. Rick found a larger tub that made sense, which it only took the Turtle another five minutes to climb out of. That's how he ended up in the sink.

After we cooked and ate dinner, I decided it wasn't terribly convenient to have a turtle close by as I attempted to wash dishes, so that's when we diverted to Plan D -- the bath tub.

A little research leads us to believe he's a snapping turtle. Apparently, when well taken care of, they can grow up to be 30 pounds. So we're going to work very hard to find this little guy's family, or a new family that knows what the H they're doing with a snapping turtle.

Until then, I guess we're the foster parents of this little guy. Any turtle experts out there??

I love it when turtles show up around the house, it's like a guest bringing joy and love and peace and happiness! But then we send them on their merry way:)

(I'm having a problem with blogger not uploading my videos too, so I use onetruemedia.com--it's free and I find it much easier to edit too)

I am far from a turtle expert, but he's a cutie!! I would be right next to your kiddos getting excited! I love little surprises like that!!

Too cute! Not sure what I'd do with one if it ended up on our doorstep. We only find things like lizards, lots and lots of lizards, mice, black widows, you know ranch-y kid of stuff!

So cute! We found a turtle in our backyard once when I was really little. We only kept it for about a week or so before my mom made us let it go, though. Have fun with your new pet!

I love turtles :) they are soo cute! There's a certain point in the summer here where you really have to watch when you're driving because they crawl out onto the road!
I don't think you have a snapper here. But if I'm mistaken, watch out! They are usually not too friendly and when they bite, they don't like to let go. They have a pointier snout that looks almost like a beak, so I really don't think this one is a snapper.