Giddy Up and Go!

I love using Mama Kat’s Writers Workshop whenever I can for a Thursday blog. Today I’m choosing the subject of:

What are YOU giddy about?

Ironically enough, I’m giddy about having gotten to say “Giddy up” this week! 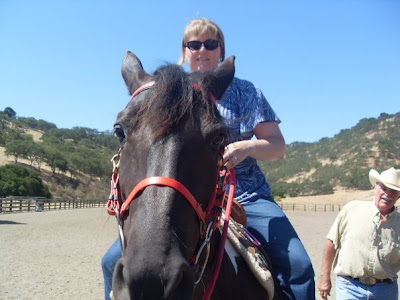 Alright, technically, I didn’t say giddy up to a horse. I’m better with reins, a click and a kick. But I got to ride!

Growing up, we spent a great deal of time on my Uncle Hank’s ranch along the California coast. His place included a great deal of land in the hills of Half Moon Bay, and when you rode high enough, you could see the ocean just across the highway. My brother and I spent hours upon hours riding through those hills for probably eight years of our lives. I learned to ride on a sweet chubby pinto named Sparky, while he got to ride a great big guy named Chief. Sparky would have preferred to laze about in the fields, eating herself stupid, so she was never terribly enthusiastic about saddling up. I never quite felt a bond with her like I did with Chief, even if he never was my saddle horse. When I was finally good enough to try it, I used to ride Chief bareback out in the pasture, and he never seemed to mind a bit. Sometimes he’d just follow me around, and when I stopped walking, he’d put his nose right over my shoulder next to my cheek.

*sigh* Can you tell I miss those days?

We’d probably still be spending time up in those hills, but sadly, my mom’s brother Hank succumbed to cancer when I was in high school. His wife did what she could to keep her head above water, and in doing so, sold all of the horses. (Well, all of them except Sparky, who sadly died while eating herself stupid out in the pasture.)

If’ I’d been told any of this back in the day, I know I would have offered to pay for boarding of Chief at their ranch. I was the cheapest child alive, and all the babysitting I did would certainly have made it possible. But I didn’t know the horses were gone until it was too late. That still breaks my heart.

Moving on to this week…

My husband recently made a friend in town who has a beautiful ranch up in the hills above where we live. We spent the 4th of July with them, where they insisted we should come riding with them sometime. Sure enough, on Sunday, they offered again! We met them out at the corral they use, where they had two of their hoses, Travis and Bessie, all saddled up.

Noelle was beside herself with joy that she was going to get a chance to ride a ‘real horse.’ She loved every minute of it. 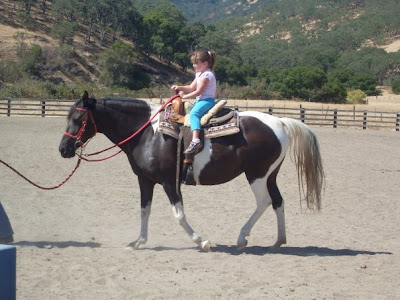 Charlie hadn’t been as enthusiastic, so we weren’t sure what he’d decide. I guess seeing Noelle have so much fun prompted him to give it a shot, and wearing the flip flops I hadn’t realized he was wearing until it was too late, he took his turn on Bessie. 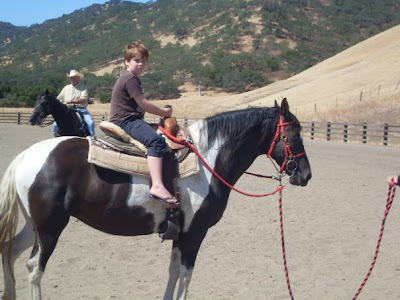 I think he liked it, because the first thing he did when he got off was come to me, hug me, and said, “Mom, this is the best day I’ve ever had in my whole life.”

Finally, it was MY turn! I hopped up on Bessie and laughed at the fact that she’s a chubby pinto who wasn’t enthusiastic about being ridden. Same ol’, same ol’.

We followed their owner and Travis around the corral a few times, and each time we turned back, Bessie was all about getting back to the start as fast as possible. Once again, just like Sparky. When I wanted to go out one more time, because they wanted her to get a little run in, she wasn’t impressed. She did everything she could to stop us from leaving the group, including turning in circles over and over. We all laughed, but they didn’t want her to get away with that, so I was directed to keep it up and give her a good kick to show her I mean business.

It took a few more tries, but finally, I won. Off we went, trotting to the end of the arena, and it felt great. Even better was that I really let her have at it on the way back, and we got to gallop a little, which was exhilarating! I can’t remember the last time I felt that free and happy. 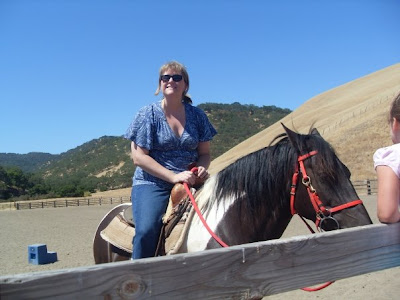 Now that they know I can ride, they’ve suggested I join them the next time they go out to the beach with the horses. You can bet I’ll be happy to take them up on that! Spark – er, I mean, Bessie and I will have a fine old time.

However, I will need to buy some boots before then. My only mistake on Sunday was wearing sneakers, leaving my ankles unprotected. The stirrups did a real number on me, bruising me all the way to the bone, I think. I could barely walk the first day or two after, but as you can probably guess, I’d still go back and do it all over again. 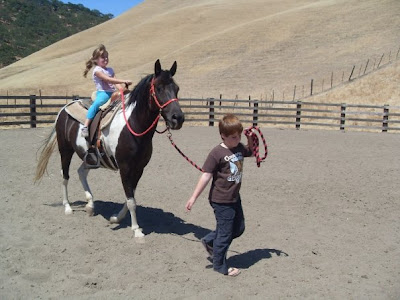 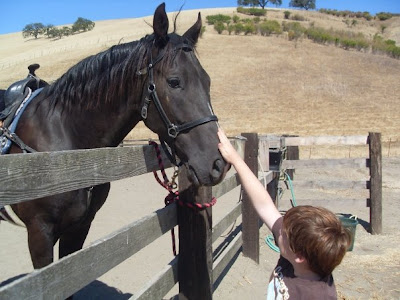 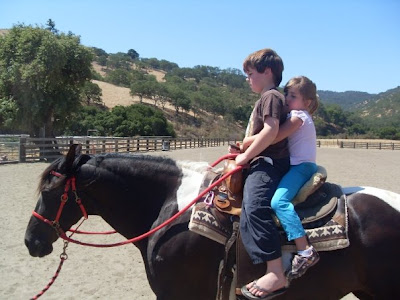 What a wonderful time you all had! Thank you so much for sharing your special day, and your special memories!

What a nice day. Thanks for sharing.

Here via Mama Kat. What a great story...I had horses growing up. I just thought it was normal...everyone had them! Those are beautiful horses too!

This looks like soooo much fun! I used to ride at summer camp when I was little, and I have never lost the desire.

Ahh I wish I was riding horses!! That would be a blast!! I'm glad you're getting in a little R & R.