Thoughts on a Memorial

Thanks to the technology of live television on my computer (without my having to do a darn thing) I was able to catch the last half of the Michael Jackson Memorial here at work. It streamed in the background whilst I worked – how handy is that?

A few things I can’t help but want to mention.

Everyone looked lovely, though I thought perhaps it was a touch on the cheesy side to have all of the brothers matching and wearing a silver glove. But I get it, and it was a nice tribute.

Note to Mariah Carey – did you happen to notice everyone else wearing appropriate funeral attire? FYI, a dress with cleavage down to your rib cage wasn’t necessarily the most appropriate choice, but hey, at least you can pull it off. And I’m sure, for at least a few moments, most of the men forgot why they were even there. 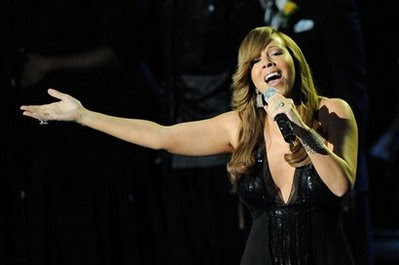 Just as a tip for the future, here’s how a lady dressed on that day. 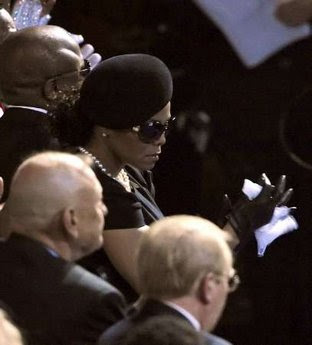 I was extremely touched by Paris Jackson’s comments on her dad. She is a beautiful little girl, and I’m heartbroken for her and her brothers to have their entire lives tossed up into the air so abruptly. I can only hope that they’ll find stability with the family that loves them. 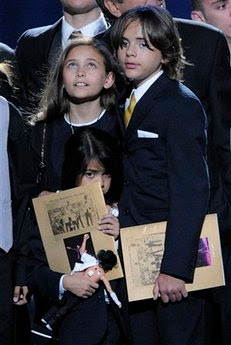 One thing I couldn’t help but notice, though. Doesn’t ‘Blanket’s’ doll remind you of someone? Perhaps…Bathtub Gansgta?? Until I noticed the little glove, that's all I could think of.

Yo. Check it out. Had to give props at my boy MJ's service.

My man had mad skills.

Rest in peace my brotha.

Totally agree about the Mariah dress--even Janet was completely covered and she's the queen of wardrobe malfunctions!

Great post :) haha about the doll :) and I also agree about Mariah's dress...

Janet, Latoya and Katherine looked stunning, as did Paris! Mariah Carey needs a reality check as to what proper lady's funeral attire is, I agree! I too feel sorry for Paris and the rest of the siblings :( She was really brave to stand up there and comment. I'm grateful I'm not the only one to share those feelings!