THAT was an adventure! I've flown a lot in my life, but it's been a while since I've flown through a lightning storm. Thank goodness we had experienced pilots and were able to get around the weather just in time for a landing at the Dallas airport.

We would have been on time had we not sat at the gate for an extra 50 minutes before take-off, which was apparently due to some paperwork that needed doing. All I heard was "wing" during the explanation, which didn't make me feel great.

But that's not even the eventful part of my trip so far. Nope, the real fun started after we landed.
The highlights include:

* Calling the hotel and finding out they stop running their shuttle at 11pm. (It was now after midnight.) Their front desk staff has amazing fone skillz and I appreciated that they mentioned this fact the 2nd time I talked to them that evening.

* Finding a Super Shuttle driver who was in the process of telling a nice Asian woman, traveling alone, that a ride to her hotel would be $45. Excuse me? Is she going to Oklahoma? Then no. He changed his tune pretty quick once the travel assistant and I approached him. Suddenly the fare was $19.

* Discovered that the lone Asian woman is a talker. And I sat next to her. Now I want to charge her $45.

* Checked into my hotel, checked in with the husband, and went in search of some bottled water. I didn't make it more than 20 steps out of the elevator when the schmarmy "concierge" (if you can even call him that -- I think he's 15) called out, "Bar's closed." Excuse me? Not only is there no bottled water, but I can forget a shot, too? Dang it!!

I slept alright, though I woke myself up from a dream where I woke up too late for breakfast. Don't you love that? I'm now just hanging around the hotel while I await my ride.

My entire purpose for this trip to Texas? To surprise this lady. (The one in the middle.) 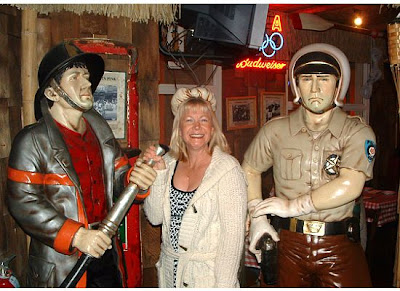 I'm in cahoots with her husband, who in a few hours, is helping me pop up in her classroom to surprise her. (She's the best 2nd grade teacher you ever wish you had.) Wish me luck!!
on 9/04/2009

Keep us updated! Give her a biiig hug for me!

I sure hope it was a fun surprise. I surprised my family like this one Thanksgiving. It was priceless

Hope you're having a great time! I can't mention the Dallas airport to my husband. Ever. Last month he had a lay over there coming home from Arizona and had such an awful experience!