You know it’s a good day in my little world when Amy Grant has a new album out. I hit Target up early this morning (just ask Kim – hi Kim!) and bought what appeared to be their last copy on the shelf. 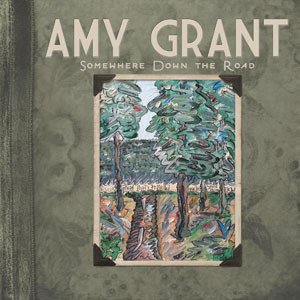 I listened to it on my hour long drive to work, and for the most part, I love it! This album is a collection of songs all about the journey of life. Some are older songs, most are newer songs, and one is even a remake of a song from twenty something years ago! Amy always manages to capture her thoughts on life in music, making all of her albums captivating to me, and this one does no less. One song, called “Overnight,” is a duet with her 17 year old daughter Sarah. I am blown away by Sarah’s voice, so different from Amy’s but no less beautiful.

As always, when I get a new album, there seems to be a song that touches on some part of my life in the present. In 2003 I was stunned by how a song called “Looking for You” captured exactly the words I wanted to say to my daughter, who I was 8 months pregnant with. I sang that song for a month (and another week) to my belly, and it was the first song I sang to her when I first held her in my arms.

This time around a song touched on something I’ve been feeling recently.

There’ve been some unkind things said about me (and to me) during the last few months that have been hurtful. Certain people have made certain assumptions about me that make it clear they think I am a cruel person who goes out of her way to hurt others. All of these assumptions caught me off guard, and were also completely wrong, but they leave a wound. Worse still, some of my friends have been treated poorly, and their only mis-step was in continuing to be my friend. To support me and be there for me during a difficult time. To answer when I called out, “Please…please help me.” I am so blessed to have such friends right now.

Because the truth is, right now I’m at the beginning of a divorce.

The last few years have been difficult and painful, and the direction of my life is not one that I wanted.

I do not WANT to get divorced! I do not WANT to end my ten year marriage! But there are variables in this situation (which I will keep private) that make it impossible for my kids and me to go forward with my husband. So we are going forward in a new direction and doing our best to create a healthy and happy life for ourselves.

So to those people (including me) who sometimes make awful assumptions or criticisms about other people, or hurt someone out of pure selfishness and thoughtlessness…perhaps we could take a lesson from these lyrics and stop spending time looking for the bad in one another. Because we’re going to find it.


Find What You’re Looking For

Haven’t we all learned the best life lessons
By falling, and falling down hard
If we’re looking for somebody’s failures
We won’t have to look very far.
on 3/30/2010

Nicely written, Mer. As always, you're in my prayers ♥

My heart goes out to you, Merrie. I hate that you're having to go through all of this but know that I'm thinking and supporting you a thousand miles away :::hugs:::

of course I had no idea that anyone was saying mean things about you, but considering the position you are in and the choices you are forced to make... others sometimes just don't understand.

I will try to remember to pray for you when you name pops into my mind... Getting to meet you again last December reminded me that you are a quality person, one that I would love to spend time with and get to know better (thank goodness for your blog and for Facebook!).

I am proud of you for making the hard choices that are the best for you and your children.