We had a decent summer with some highlights and low lights. 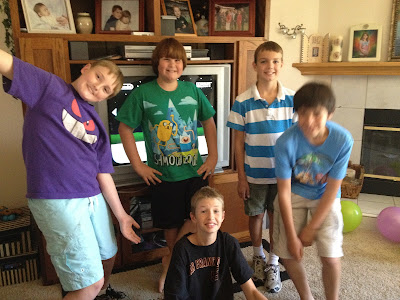 A highlight was Charlie's 11th Birthday, which we celebrated with family and a lot of friends.  (Charlie's the one in the green shirt, in case you weren't sure.)  I recently looked back at his previous birthday pictures and am still a bit in awe that this big half-man is my little boy.  He's wearing Axe now, thanks to a friend's sleepover gift bag goodie, and we've all been baptized in the scent when he's gone a little "overboard" in the application.  (*Cough*hack*) In just a few short years he'll be taller than me, which isn't a simple feat when you factor in my six feet.

A low light was a very bad week with the YMCA near my work.  They only lasted four days, though it felt like a month.  I've never seen my kids so unhappy in such a short amount of time, and after hearing about some of the ridiculous outings they had, I couldn't say I blamed them.  The overall feeling for them of summer is that it was "ruined" by being at camp for most of it.  One word for this single working mom: guilt. 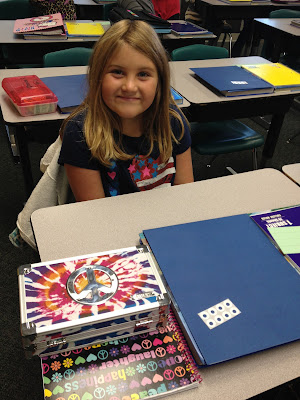 But now school's back in session -- I have a 4th grader and a 6th grader this year, which means one thing: homework is getting harder!

I wish I was suggesting that it's harder for them, but they don't seem to be struggling too much.  The one who's struggling is ME.  And not because I'm some dim-witted fool who can't add or spell -- truly, I get by pretty well.  But as all you other parents out there know, the methods of HOW they add or HOW they determine what kind of sentence to write is all new!  My way of solving a problem or getting to the conclusion is now considered wrong, which makes me rather useless sometimes.  I really didn't see that coming.

Last night was back to school night for both kids (at two different schools, so we did a lot of running around), and I was very impressed with Charlie's 6th grade teachers.  One of their biggest priorities this year is to prepare the kids for junior high, so there are three teachers teaching six subjects, and they're cracking down on the hard rules for turning things in on time, etc.  So far I haven't heard much complaining from Charlie, so I'm hopeful that he's adjusting well.  Amusingly, the Lit teacher is actually younger than me.  By a lot, I think.  That's a first for me -- to be older than the teacher.  For the kids it's a good fit -- he's "cool."

And now here we go into fall, with many of my favorite things to enjoy:
- Salted Caramel Mochas at Starbucks
- Fires in the fire place, coupled with warm fuzzy blankets
- Outings at the beach before it gets too cold
- Noelle's 9th birthday just a few weeks from now
- Packers back on the television starting this weekend