The Gift of a Gift

A couple of companies ago I had the pleasure of supporting quite a few executives, and with that job came the benefit of sometimes generous bosses at the holidays.  Not everyone has the clue that assistants appreciate being appreciated a few times a year, but there are some that enjoy giving back when they can.  I often had the privilege of enjoying high end gift cards, wine, good chocolates, etc.

There were a few that didn't seem to get the gifting concept.  Some examples would include the CEO who had me go out and purchase a great deal of gift cards for people at Christmas who had helped us with an office move...that I had coordinated.  He did not direct me to buy a gift card for myself, so I took care of that for him.  I appreciated his absentminded thoughtfulness.

Another CEO thought giving me a hand knit scarf (or so she claimed) in an atrocious color that I won't EVER be able to wear, along with a bar of soap, was a good move.  She was mistaken.  When I left that company, she also told me to get my own goodbye cake and plan my goodbye party.  I decided to forgo the cake and the party, and instead gave myself a very generous Starbucks gift card from her and the team.  I felt the love.

Do I sound ungrateful?  I think I was just spoiled by generous people who enjoyed sharing their good fortune in some small way with their Exec Assistant.  They got me used to a certain level of generosity, so it surprised me to be treated so poorly by later bosses.

These days I'm working for someone new that thinks of me every time he stops by his favorite wine store.  I always get a phone call -- "What's your favorite wine?"  He's very good to me on every Starbucks run, too.  Hands me a $50 and says, "Get something for yourself, too!"  I appreciate those gestures a lot, because it tells me that my efforts in taking care of him every day are not lost on him, and that's awesome.

The point of this not so short story is that I finally spent my last gift card this morning.  I held onto it for several years, knowing that at some point I'd want or need a little something for myself.  Sure enough, I reached that point this month.  My beloved Brighton watch that I've had for several years now is not doing so well.  The band is tearing and I know that it will need a special replacement soon.  In the mean time, the battery is dead, so I'm not even wearing it.  Since I've been walking around without a watch and looking at my pale wrist entirely too often, I decided now would be the time to treat myself to something new.

Here's what I ordered from Nordstroms just a few short hours ago. 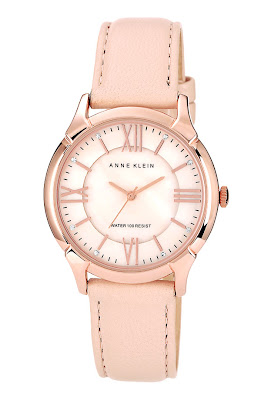 Isn't it pretty??  I've never had a pink watch before.  Brown, gold, silver, black -- even sky blue!  But this pretty in pink is a first.

A big hearty thank you/shout out to the boss who gave me the gift card.  Though he didn't care much for me since I was about a foot taller than him and he had a bit of a complex, he had a thoughtful wife who didn't forget me at Christmas.  Thanks Mrs. S!
on 10/25/2012

Your stories of remembering yourself in spite of those forgetful bosses has me cracking up. I'm glad you slipped a little something for yourself in from time to time :)