This is a big year for our little school family. Not only do we have a new Kindergartner, but we've also transferred to an entirely new school across town. We were all in need of a fresh start after a lot of problems that we had at the previous school. Some of that can be attributed to my son's behavior in Kinder, some to their over-reactions to later things, and a lot to how they handled us personally. We were ALL ready for a great first day!

To begin with, the new school starts 50 minutes later than the old school, and that in itself makes life easier! First to start class was our fabulous new 2nd Grader! 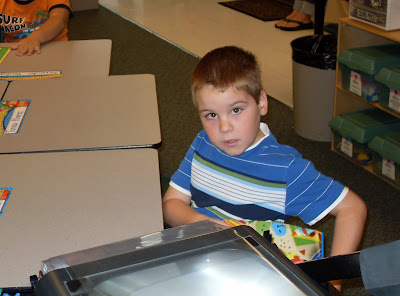 He's never been one to adjust to change really well, so we knew he wouldn't be Mr. Excitement about a new place, but he did sit right down at his desk and was cool about it. (Even if he did look a little grumpy and kept stretching the front of his brand new shirt. *sigh*) His teacher is actually a CM customer of mine, thought I didn't realize it right off the bat. My best friend, who taught at this school for a while, says she couldn't have hand picked a better teacher for Mr. 2nd Grader and feels confident he'll do well with her.

Once he was settled in, I headed for the office to see about getting my Kinder girl transferred to another classroom. It seems she was set to be with the teacher who's reputation includes a) being out sick 3/4 of last year, b) family problems, c) lives 4 doors down from me and d) is totally disorganized. Doesn't that just scream consistency to you? Which is exactly what you want for a room full of five year olds. Good call.

After filling out the form, we hit Starbucks and then Payless for new school shoes. (Yes, we get things done in a timely manner at our house.) I managed to get some new heels for myself, and the Kinder girl got pink, pink, pink. 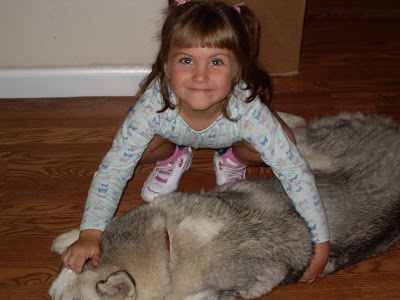 Hubby picked us up with fabulous news -- the school had called and already they had moved our daughter to another class. Huzzah! We arrived at the classroom and discovered that her new teacher, Mrs Q, is the warmest and yummiest teacher EVER. She's just what I wanted for my little girl, and will be a great transition into public school for her. I think I bored the girls in Vegas, to death, with my worries about N being ready for Kinder. She's a little on the small side (which she didn't get from me!), and is still four for another month. Time will tell if we made the right decision. 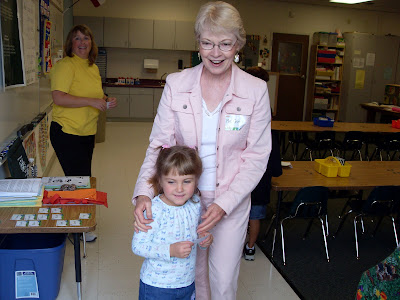 Orientation went wonderfully, with the kids having time in another room to have fun, while we got the lowdown from Mrs Q. Even better -- she spoke English the entire time, so we didn't miss anything. (Backtrack to Kinder orientation two years ago at the old school -- everything in both English and Spanish, with lots left out for us English speakers, and they lost us AND our kid, both figuratively AND literally.) Kinder girl's new class has a lovely diverse culture that is a nice mix of everyone, and I couldn't be happier.

At the end of the day, we picked up the 2nd Grader, and I fully expected grumpiness and a need to talk to the teacher. Instead, I was surprised by a cheerful kid and eventually a smile. 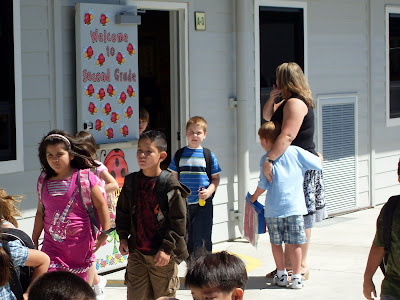 He was SO HAPPY! He won the first prize during Back to School Bingo, which he carried around for the rest of the day and even slept with. (Yay Mrs. B!) He enjoyed reading books and playing with his friend at recess, and as we walked out, he said, "That is one heck of a school!"

What luck. I am so happy.

Yay for great first days of school! I was stressing about Big pup getting Ms.B for 1st grade this year. I had heard so many bad things about her. But I was so relieved to see his new teacher is Ms.C. Very lucky!

How awesome!! Isn't it great when you love your kids school?!? It makes life easier......for us and them :)

Woohoo - that's great! And, good call on the K situation - N's in a good one!

That is great Merrie! My S Has the same Shoes as N! Looks like it will be a great year for the kids!