I wish I had some fabulous Halloween pictures of my kids to post, but I don't. Another mom will be sending me some of those at some point because I was clever enough to walk down the street without my camera. By last night I was exhausted after a day of Halloween festivities at work, and was just along for the ride by the time we went trick or treating.
I do, however, have pictures from work. Obviously I can't go posting anything too descriptive, but I think my favorite picture is easy -- this is my boss on the left. Our Blue Man Group was a HIT, and they totally got into it and got into character. I was so proud. 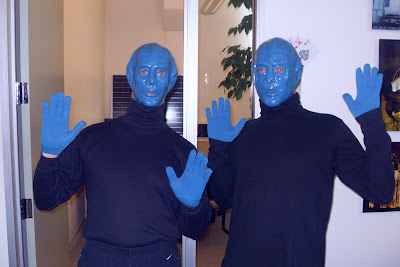 The best costume, which I voted for, was Michael Myers. Now, I don't know about the rest of you, but I saw "Halloween" when I was about seven, unbeknown to my parents, and that character has forever been my weak point. Do you remember that, Danielle? It was at your apartment! Not only did I avoid him at work all day, but when I was trick or treating near his office, I hesitated to go in. I decided it didn't look like he was in there, but had set it up to be pitch black with the movie going on his monitor and a strobe light flashing. I made it in about four feet before I realized that he was standing off to the side, at which point I screamed and high tailed it out of there. Yes, I'm 32. He wins. No, I didn't take his picture.
Anyone else have a movie character that they can't handle?
on 11/01/2008

I'm so jumpy and easily scared I would have done the exact same thing - lol!

The Scream characters can freak me out some. Funny story - my brother has the Scream costume, put it on one random night and went to a friends house where a bunch of people were hanging out and scared the crap out of them. It was no where near Halloween and to this day they have no idea it was him!

I can only laugh because I wasn't the one being scared.

that is a great costume idea.