I've got another book on CD under my belt. 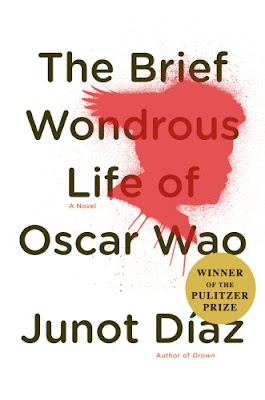 I truly wasn't sure what I was getting myself into, especially at the beginning, but I stuck it out and was rather amazed at the story that unfolded. It skips through several generations of a family that started out in the Dominican Republic and ends up in Jersey. The kind of world they had to endure in the early years under the regime of Trujillo was shocking. It's a book like this that makes me appreciate where (and when) I live. I wouldn't recommend it to anyone looking to read anything "light," but I do think it's an interesting opportunity to experience a new perspective.

Thanks to this cold I spent more time at home this week than I did at work. (I'm not really sure if that's actually sarcasm I'm using, since it was nice to be home more, even if I did feel horrible.) I went in yesterday and had to have about 12 conversations about how I was feeling, which I realize is only tiresome for me. I've been fighting a sinus headache since 5:00 this morning and hope to kick it so that I can get some housework done this weekend. It would be nice to see our counter tops again.

Noelle just came in, dressed in one of her nice dresses, and told me that she's looking for a bouquet of flowers because it's time to marry her boyfriend. Apparently the bell rang and that means it's time for her to get married. I directed her to some fake flowers in my hopeless chest. She's five, so I'm not worried that she's about to run off and ruin her life today.

Oh my Gosh- your post reminded me of what Suzie did yesterday. She is only 2 and was carring around a boquet of flowers saying she was going to get married. Kids are so funny.