This is a picture I've gotten used to looking at on the USGS website. Here's the latest and greatest -- see the big blue square? Guess what I felt a few hours ago?!

It didn't take long for it to be determined as a "light earthquake of 4.3 magnitude."

I don't tend to take pipes and lights banging together over my head "lightly," but what do I know? The biggest earthquake I've lived through was the Loma Prieta in 1989. That one was 6.9 and caused a lot more trouble and damage than the "light" one we felt today.

I was out in front of my house with my best friend of the time, waiting for her mom to arrive to pick her up. My grandmother had just arrived a little while before after making the three hour trip to our house in her big RV. My friend and I were sitting flat on the concrete walkway up to my front door when the quake hit, which gave us a great perspective. First, we heard it, and it was LOUD. Then we watched as it rolled along the street in front of us -- literally, the concrete was rolling in waves like water. People were pulling their cars over, thinking they had a flat tire. My mom suddenly opened the front door and yelled for us girls to stay right where we were! She and my grandmother had been hugging in the doorway moments before.

We luckily had no damage other than a few broken knick-knacks. Some other family members were not so lucky. One aunt had to have her entire fireplace re-done, and another uncle lost a great deal of dishes and valuables -- they were all closer to the epicenter. One of our neighbors' pool even cracked and drained. Our pool survived, though the backyard was sopping wet and the water was still waving back and forth minutes later. I'm glad I wasn't back there!

Once the phones and television started working again, we were faced with the terrible losses caused by that earthquake, including all the people hurt and killed on the Cypress Structure. We all counted our blessings that day, because my grandmother had just driven across it a few hours before. 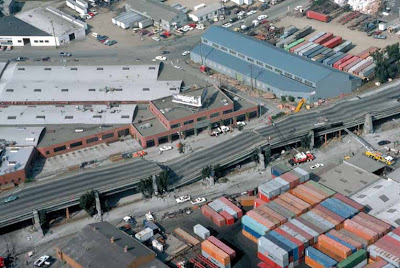 These days I can't help but panic a little when one starts, because all we ever hear about is how we're waiting for "the big one." It seems that this "Big One" is going to cause damage of epic proportions and make all of our lives miserable. California is going to either fall into the water or at least be reduced to a pile of rubble. I would move, but if it's not quakes, it's tornados and hurricanes. Where would I go??

And they're so unexpected! There are no warnings, no forecasts, no alarms -- before you know it you're just in the middle of it, and you have no choice but to ride it out.

Funnier still are my various reactions. This morning I was actually on the phone when I realized we were having an earthquake, which was probably a good thing. I told the woman what was happening, but still transferred her to voicemail, after letting her in on what was happening. I thought we both handled it very well.

Unlike the time I was at Bunco and made a total idiot of myself when I yelled at calmly told my friends that they should get in a doorway or under a table. I didn't even know I was yelling speaking loudly until I finally heard myself. It was beyond humiliating at the time, but we laugh about it now, especially on a day like today.

Worst Earthquake Confession: When Charlie was a newborn, we once had one while he was sitting in his bouncy seat, which was on the kitchen counter. I jumped in the doorway the moment I realized what was happening, only to realize I had left Charlie on the counter. Apparently my protective mothering instincts hadn't kicked in just yet!

Even the Loma Prieta event didn't do much to phase me. After we rode it out, my friend and I laughed afterwards (and for years) at my brother's reaction: he declared "THAT....was an earthquake." That night I drew a cartoon strip of the day's events, which turned into an ongoing cartoon called "A Day in the Life of Ker and Mer." I wish I had the hundred's of drawings I did over the years, but alas, they live with (or were destroyed by) that former friend that I'm not in touch with anymore.

So, fair warning to you all. If you're near me during a quake, any one of these things may happen.
- I could yell at you
- I could laugh the second it's over
- I might even shove you aside as I make my way to safety.

i'm shocked i didn't feel that one but heard about it on the news today. i need to post my earthquake of '89 story one day too!

I think I'll stick with the hurricane weather. Where we are it never seems to make it all the way to us except at thunderstorms and rain. I can't imagine earthquakes.

Love the comment about Faith you have in the upper left corner of your blog. Awesome! Can't imagine earthquakes.

I think I'd be scared out of my mind having earthquakes! I really would! I'll keep my hurricanes, please :) I think I'd be like you during a quake (your list at the end).