The World of Scouts

Something that I love about being a Mom is how much joy I take in seeing my child happy.

I never knew how thrilling it could be to simply take from the thrill and excitement on their little faces until it happened, and then I was hooked. From those first smiles at a few months old…to seeing their faces the first time they saw Disneyland…to the joy of just running through some sprinklers on a warm summer day.

Watching them experience life with excitement is a gift in itself.

I bring this up because I’m absolutely LOVING watching Charlie have a great week! Not just any week, mind you…this is Cub Scout Day Camp week!
Charlie’s never been in any scouts at all, and hasn’t taken any interest when we suggested it, either. Then we found out that the camp was coming up, and thanks to our neighbors as well as some friends in the program, Charlie got excited about the prospect of being involved with something his friends were doing. It also didn’t hurt that we told him there would be a BB gun session – the boy in him loved that idea.

Knowing that he’s not a “joiner” most of the time, I just didn’t know how it would all go. With my husband there (working in the woodworking area) the first three days, I at least knew he’d be available should they “ask” Charlie to leave. Hey, you never know! Did you see the words “BB guns?”

Day one started off all right, except that Charlie didn’t care for the soap carving – after he cut his hand open. Can you blame him? But the BB gun time more than made up for it – especially after his first shot was a bulls eye. You could almost hear the cub scout gods up in heaven. “And…he’s ours.”

Every day this week they did one amazing thing after another, and Charlie loved it all! He got to swim in not one, not two, but three pools on Tuesday. And on Wednesday he brought home a beautiful tool box of his very own that HE made! The pride in this little guy’s eyes – that’s something I’d like to see there a lot more often!

Tonight is the end of the week with a full family picnic dinner, skits and I’m guessing the badge ceremonies. Charlie’s thrilled that he’s going home with something like all 15 badges, which he knows gives him a leg up should he choose to join scouts in the fall. C’mon, cub scout gods – you know you want him to!

I was mistaken about the "badges" part from last week. I now know that while Boy Scouts earn badges, the Cub Scouts earned "tokens" all week. Each one was an adorable statement on the activity that they did, and could be pinned to their hats. When I arrived at the park on Friday evening, Charlie was proudly displaying all of his tokens, a sign that he had worked hard to accomplish something. Thank you, Cub Scouts -- my son was proud of himself!!

When I first arrived, the Boy Scouts were in the process of retiring the flag from the week. I don't know about you, but these images got my heart going. It was all done very respectfully, and I had to wipe away a few tears. 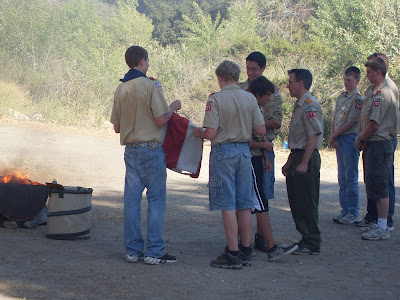 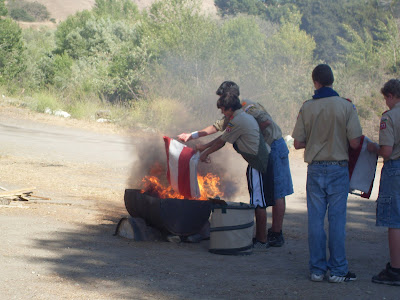 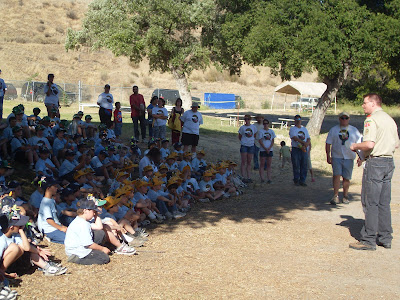 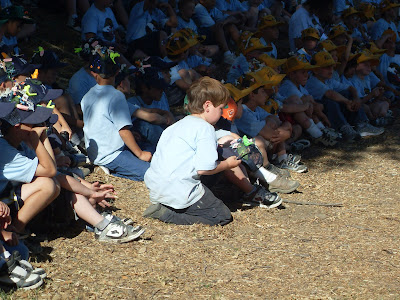 We stayed for the BBQ (where they very cleverly wrap the home made burgers in McDonald's paper to get the kids on board -- how funny is that?!) Then all of the groups put on skits in front of everyone. This became the one thing Charlie could not bring himself to do. He even whispered to me, "Mom, I've got stage fright!" We instead stood with his group off to the side and watched/supported them as they went on stage.

To celebrate his glorious success, we stopped for ice cream on the way home, and had some nice family time. This was the perfect end to a perfect week for my boy.

Did I mention how proud I am of him??

Very very cool! I hope he caught the 'scouting' bug enough to join in the Fall - it really is a great organization! I was Matthew's Webelos Den Leader this last year and it was a ton of fun!

Such an awesome experience for him!! I would love to hear about Charlie continuing in scouts come the fall! I'm so thrilled that he enjoyed it!!