Not so strange, but fun!

I'm stealing a meme! I haven't done one in a while, and after getting a kick out of Ali's answers, I decided to do follow her lead. Thanks Ali!

1.What is the color of your toothbrush?
I use whatever toothbrush my dentist has given me. The most recent one is clear with a hint of blue. I'm looking forward to my new one next week.

2. Name one person who made you smile today.
Simba. Lately, he's taken to sleeping in the dirty clothes basket that is in our closet. Perhaps he likes the scent of Rick close by -- I don't know. I do know that it's hilarious to see a Husky curled up inside there every morning.

3. What were you doing at 8 a.m. this morning?
Sitting in the Starbucks drive thru, wondering why it was so insanely long and slow. When I finally got to the ordering area, the guy had the hardest time understanding my order. I wanted the new latte that came out today, and finally he said, "OH, you mean the Caramel Brulee Latte? You were saying "creme" brulee." Hmm...was that really such a stretch?

4. What were you doing 45 minutes ago?
Giving my boss the run down on a meeting he has in two hours. And making sure he'd had lunch since he came from the airport and ran right into meetings. A good Executive Assistant finds out these details and feeds these people!

5. What is your favorite candy bar?
Lately, Twix. And I eat the caramel off the top before eating the delicious cookie inside. Isn't there an entire Seinfeld episode about the Twix?

6. Have you ever been to a strip club?
Eegads, NO, and don't ever want to. They just seem so depressing!

7. What is the last thing you said aloud?
"That's class right there." After my boss told me that the really nice hotel he stayed in the last few days also had a "murphy bed," which is apparently the term for a bed that folds up into the wall. You don't usually see that in a high priced hotel. I was amused.

9. What was the last thing you had to drink?
Coca Cola Zero. I'm risking the caffeine today after a major caffeine induced, heart racing, panic attack yesterday. But I had to do it! The migraine I needed to kill was killing me!

10. Do you like your wallet?
No. I do not like my wallet. I LOVE my wallet! I bought it for myself after collecting enough gift cards from one of my bosses, who is under the impression I love Nordstrom. I don't, but with enough money to spend, I don't hate it. I have enjoyed this wallet since the minute he I purchased it, and will continue to love it until the day it falls apart. 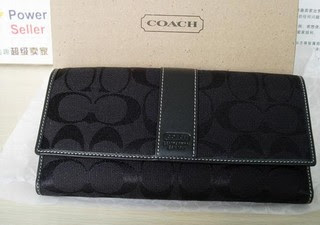 Loved your answers... may "steal" this for myself... if I could figure out how to do it and have cool answers like yours :)

Our little Tiger T dog sleeps on Bob's clothes that he leaves on the floor of the closet. And, if you try to get near him, he growls ferociously (as much as a dachsund/terrier mix can sound ferocious!)

I love that wallet too! I went to a Cash For Gold party and got a new wallet. I love it but it is so heavy! It is weighing down my purse! TOO much bling!