Charlie and the Chocolate Factory

2010 is turning out to be a very trying year for our family. It’s not that I didn’t see it coming, what with a divorce and all, but you don’t really know how hard it’s going to be until you’re in the thick of it. I wish I could say that the hardest thing for me is being on an emotional roller coaster – one minute I’m up, the next I’m down, and I don’t see it coming until I’m there. Frequently in the fetal position – sometimes physically, often mentally.

Unfortunately, the worst is seeing how hard things have been for my kids. They have their own roller coasters to deal with, and each of them has different ways of showing it. We’re all taking turns showing our Mr. Hyde side. Thankfully it’s usually on different days or hours (or minutes) than the others.

To make things worse my son has been dealing with bullies at school, and it’s really getting out of control. The school is aware of it, and Charlie knows he can go to the vice principal about anything, but I fear that, as time has gone by, he’s being seen as more of a tattle tale than a troubled kid. Frankly, I encourage him going to the VP, because taking it into his own hands could lead to much worse things. The last thing any of us needs is for him to punch these kids in the nose, though I confess that’s exactly what I would like to do. Oops, did I just type that out loud?

The point of this story, my dear children, is to help you appreciate on a more intimate level why it is that Charlie needed a boost this weekend.

Our town has a very active theater group that puts on musicals through the year. A great deal of them are kids only, and it’s a great way for families to get involved in something together. I am hopeful that our little family can join in sometime in the future – drama was a huge part of my life in high school and I miss it!

This last weekend held the final two shows of Willy Wonka, which featured about a dozen leads and 42 Oompa Loompas. Thanks to a friend of mine whose daughter played Mrs. Gloop we got tickets for the Saturday night finale. The kids and I are big fans of both movies and got a kick out of seeing the show live. The actors were wonderful, the set was clever and the action was lively.

The highlight of each of the eight performances was tied in with a local candy factory we have in our town. They teamed up with the show and offered a golden ticket to be hidden and sold each night with their candy. When we stepped out into the concession area at intermission, we went straight for that table to take our chance. When it was our turn, I told Charlie to pick a box of the chocolate covered toffees, and he did. As we walked back to our seats, he glanced inside the box. I asked him if he saw anything, which he didn’t. I reminded him that we knew it was unlikely that we would win, but it was fun to try. He was great with that.

Back at our seats, he pulled out the bag of toffees and was trying to tear into them in an odd way. I asked him what he was doing, and he held up the bag for me to see. That’s when I saw it – attached to the back of the bag was a white slip of paper that said “WINNER.”

Are you kidding me??

I not so subtly grabbed the bag from Charlie and worked the paper out of the plastic it was in. Inside was an actual folded up golden Wonka ticket!! 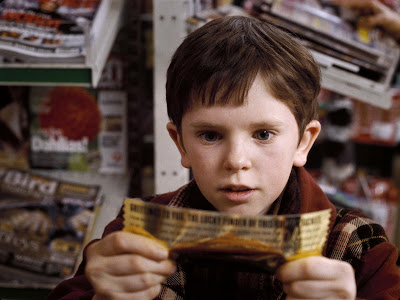 Charlie was absolutely over the moon! I don’t know the last time he smiled this much – I think he was actually glowing a little. We got the attention of one of the producers, who came over and congratulated Charlie. Better still, he was thrilled to hear that our boy’s name was Charlie and that he’d won the last golden ticket. How fantastic is that?!
People came over to congratulate him during the rest of intermission as news spread that the little boy in the red shirt named Charlie had won. When the show started up again, they brought him on stage to recognize him, which he handled well by not looking at the audience. (Stage fright.) It was fantastic watching him feel so good about something – nobody in that theater needed it more.
As the winner, Charlie is going to get a tour of the candy factory with all of the other winners, a gift basket of goodies and a one in eight chance to win a year’s supply of chocolate. Just like the real Charlie in the Chocolate Factory, he only gets to bring one guest, and do you know how he chose? He said, and I quote,” Mom, you got to be there when I won the ticket, so I think I should bring Dad to the factory so he can enjoy the chocolatiness.”
Be still my heart.

Okay, Mer, that story brought tears to my eyes. How incredibly awesome that Charlie won!

Oh, Merrie, that gave me goosebumps. What an awesome experience for him..especially at a time when he needed it the most. :)