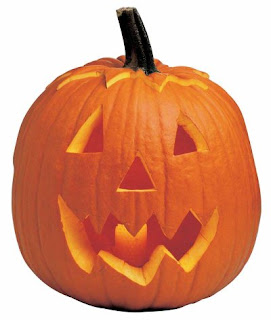 Halloween is upon us.  Tonight we carve pumpkins into Jack o Lanterns (aka make a huge mess in my kitchen that will leave an unpleasant odor behind for at least two days.)

Sadly, I do not have a pumpkin, so I will be forced to watch the kids destroy their pumpkins without any say in the matter.  When they were little I had all the power, but nowadays I'm the designated scooper for when they get tired of it (after maybe 3 scoops) and then I get to wash and bake the pumpkin seeds for them to enjoy.  After all that, I don't WANT a pumpkin of my own.  I just want to carve one.

I think we tried one of those clever kits a few years back, where you can carve an interesting picture into the pumpkin and look like a genius.  It was fun, but I really like just seeing what comes out of carving freestyle.  The grins might be lopsided, and they might even look like they've been out partying all night, but at least they're unique.

I've held off on carving until tonight for two reasons.

1. In California we've had some VERY warm weather these last weeks, and the last thing I want is a rotting pumpkin on my porch before the trick or treaters even venture out.
2. Too much pumpkin carnage on the roads already, thanks to the wonderful troublemakers who enjoy smashing pumpkins before their time.

Hopefully the kids' costumes will be finalized by tonight so that they'll be ready for the big day tomorrow.  Noelle inherited a cute one from a friend that we've added to a bit so that she'll be warm enough.  (There's a storm rolling into town just in time for trick or treating.  Here's hoping the rain holds off until after hours -- right around the time we're sitting on the ground going through the loot.  Er, I mean, the kids are on the ground going through their loot.)

Charlie's class is considered too old to participate in the school festivities, apparently, so they are called "ambassadors" instead and are supposed to be helpful in some way.  Don't ask me how that makes sense or why it's assumed that 6th graders don't want to participate.  Instead, he'll put something together tomorrow night and get some goodies with his best pal next door.  I'm wondering how much longer I'll be "taking" him trick or treating -- eventually he's bound to wise up and want to go without his mommy.

Another sad milestone in the life of a mom.

We carved our pumpkins on Sunday and the Arizona heat has done a number on them, too. It's a good thing they only have to make it through this evening. Happy Halloween!