Sure, we've had a few hiccups.  Some bad blood between Charlie and a non-friend...some poorly spent money at the book fair by Noelle...and I discovered another mom has me blocked on Facebook for some reason or another.  But beyond that, the kids are loving their schools and Charlie is rocking it as a Junior High kid.  I met his principal this morning and she's wonderful -- seriously, I could hang out with her!  We definitely see eye to eye on Charlie, and hopefully it'll help the year flow well with him knowing she's on his team.  After last year's nightmare principal, this is a gift like no other.

Everyone out there has the cutest pictures of their kids on the first day of school, so I tried to be clever, too.  I decorated our very cool fridge chalkboard (thanks for the inspiration, Kari!) to note the date.  Never mind that I never thought to note the actual date and the grades of the kids.  *sigh*  Still learning!

Now the thing to note before looking at the picture is that Noelle was suffering with a terrible toothache that decided to show itself the day before.  I had hoped that it was just a little "nothing" that would fade away, but by the time she woke up on the first day of school, she was crying from the pain.  Any other day I might have kept her home until we could see the dentist, but it was the FIRST DAY -- what can you do?  So I drugged her up with painkillers and told her to smile for the camera.  This was the best she could muster. 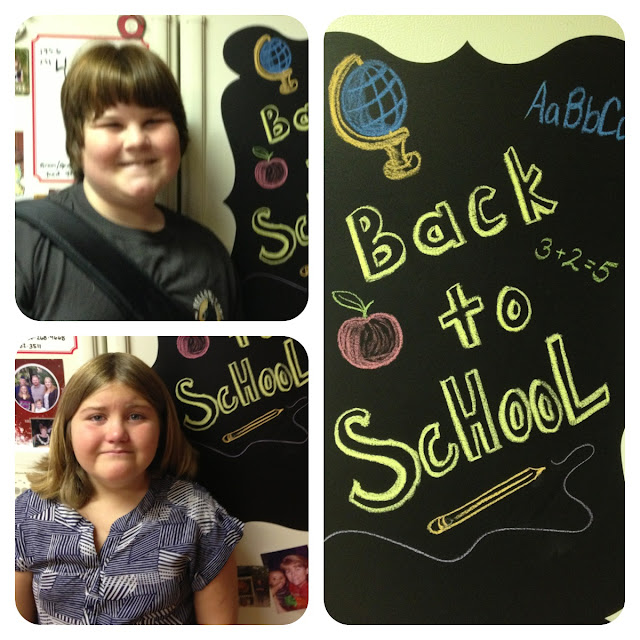 Is that the saddest face you've ever seen?  Yeah, me too.  Thankfully we got her into the dentist right after school, and she was on antibiotics by that evening.  Life continued.

One clever project that I took on in the midst of school starting (like 3 days before) was re-doing Noelle's room.  She had a few too many "kid things" going on in there, like a toy bin and mini-dresser that I had put together for her about 8 or 9 years ago.  Wanting to make it a little more grown up, we went into attack mode and got rid of about half the space-takers in her room.  After that we moved some furniture around, and then I built a desk.  I did have a few hands to help me when dealing with the heavy pieces that require multiple people, but I otherwise built it myself.  Here are the final results, which include a happy girl. 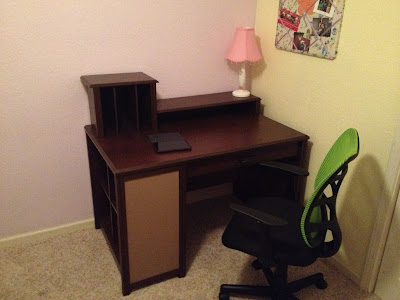 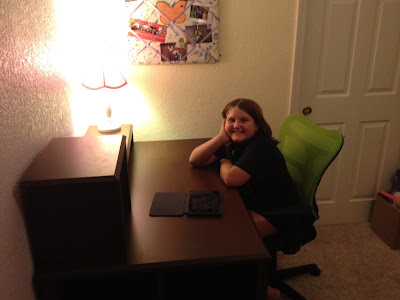 Not a bad deal for an on sale item at Staples.  If she takes care of it, I figure it can last her through at least high school.  So far she's done her homework there nearly every day, which makes the sore muscles I had from all the screw driving totally worth it.
This weekend I'll be ditching the children with their kind and loving grandparents for an anniversary getaway with the beau.  We're heading to wine country for tasting and eating and relaxing.  I feel like we've earned it, with an entire year of a great relationship behind us.  Who knows what the future holds, but I suspect it will be a good one.﻿
on 8/29/2013