This was our Christmasiest weekend yet! Yes, that's a word, really.
On Saturday I was thrilled to be hosting our Annual Girls Christmas Party, which has been going on since at least Christmas of 2002. Each year one of the girls from my group of friends takes a turn at hosting, and we all gather together for an evening of dinner, gift exchanging and of course drinking. I felt it was finally my turn to take on the hostess duties now that my kids are old enough to go out for an evening with Dad.
My husband is a gem who actually made the main dish for our dinner. It's a fabulous chili recipe that has been a hit amongst my friends for quite some time now, and he makes it perfectly. Everyone else brought the side dishes to go along with it as well as delicious appetizers and desserts. 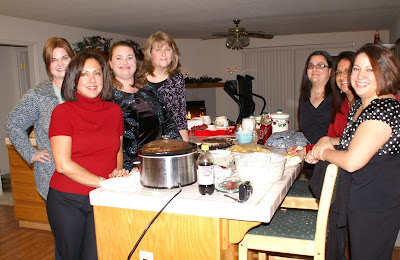 The Hubby and children took off for an evening of pizza and "Madagascar 2," and the rest of us had a FABulous night! The food everyone brought to share was amazing, and better still were the pomegranate martinis, courtesy of our friend Michele. They tasted absolutely incredible and were a major hit of the night. I think I had three, which explains the headache I woke up with on Sunday. 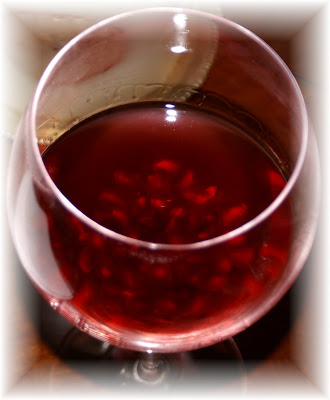 After dinner, we settled down in the family room with our drinks, and a game called "Loaded Questions" that Kim brought. I think we went around the room laughing and whooping it up for about two hours, answering the questions and telling funny stories that came along with them. I don't know the last time I laughed as hard as I did that night. 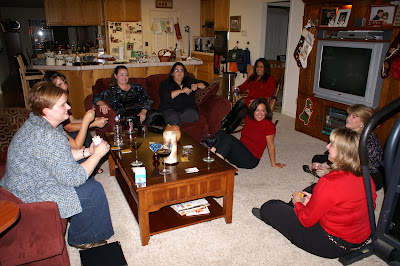 For our gift exchange we follow the "white elephant" rules, with each gift being a $20 value. We each take a turn, and you can either take a new gift or steal someone else's, with each gift only allowed to be stolen 3 times. I learned years ago that it's much more fun to steal, both to keep the game going and to be sure you end up with something you can really use, so I rarely choose a new gift. Saturday night was no exception. Michele was ever so happy with the darling Snowman themed kitchen set that she opened, filled with Snowman coasters, oven mitt, dishtowels and dip bowl. She was happy...until my turn came. Straight to me it went, and she was forced to choose again. Lucky for her the next pick was a Tastefully Simple drink mix with two fancy martini glasses, so she was happy again.
For me, this was a perfect night. I do love hosting a Christmas party, and it's been a while since I've had the chance. Thanks to everyone who came and made it a night I'll never forget!

On Sunday we relaxed, and I even took a nap, trying to catch up on all the lost sleep. Late in the day we put a fire in the fireplace, popped some popcorn, and watched "Fred Claus" with the kids. It was a nice festive end to a busy but wonderful weekend.

That looks like so much fun!! I love the white elephant gift exchange! so fun!!

That sounds fun and that drink looks yummy!

Thanks for hosting Mer, It was so much fun, I haven't stayed out that late in a LONG time!

Oh that sounds so fun!