I'm going to take some liberties with Mama Kat's Writer's Workshop for today and hope that she can find it in her heart to forgive me. You see, I can't recall that I've ever been on a blind date, but I've had a few memorable first dates. I think one of them is worth sharing, if in fact you need a laugh today, which I REALLY do.
Picture it:
It's the mid-90's, and I've been hooked up with a friend of a friend that I had met a long time before, but never dated. He was a little older than me, worked in construction and was always trying to hide the fact that he smoked. A little tip for you smokers: we can tell.
We decided to go to the movies, and for the life of me I cannot remember what we saw, though I wish I could. When we arrived at the theater, there was the awkward "who's paying" moment, until he whipped out his wallet and bought the tickets. My hero. I smiled and said, "The popcorn's on me!"
We got into the line for refreshments, and the first thing he did was order the largest popcorn there is. 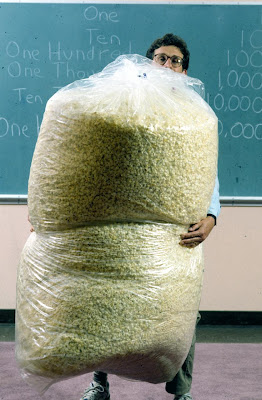 Okay, maybe not that big, but you get the idea. It was gargantuous, if you will. Ginormous, even. After that, he ordered this. 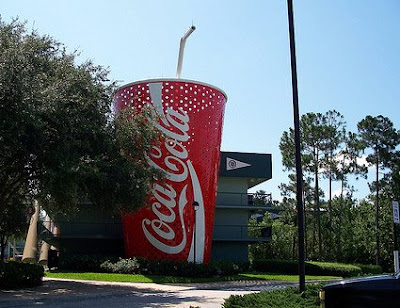 Again, I could be exaggerating here, but this helps convey the feelings I have about the size of soda he ordered. It was certainly not the small.

Now, let me interrupt you here for a moment, and remind you of the "times" we were in. I was a young, po' college student, working part time at the YMCA, and didn't have a lot of extra funds lying around. I certainly didn't have a credit card yet, and I feel certain that this was prior to the "pay with debit card" option that is so readily available to us today. That said, I hadn't come to the theater with a ton of money in my pocket, and I had no other means by which to pay for anything. Are we on the same page? Good. Back to the date.

As we approach the checkout, I'm feeling pretty confident that the cash I have will suffice for our popcorn and soda. And I thought, isn't that romantic? We'll share a bag of popcorn...two straws in the soda...what's sweeter than that?

That was all fine and good with me, until he asked, "What are you getting?"

That's right. I paid for his treats and had nothing of my own. And he never offered me any, either. I blame youth for not having spoken up. Nowadays I don't think I'd be a bit shy about saying, "I'm getting half of what you're getting. That's what I'm getting!" But back then I was still feeling my way through the world of becoming an adult and trying to date.

I think that's the part I do love about getting older. Standing up for yourself gets easier and easier as the years pass. Take heart, young people!

As for that guy...we didn't go out much after that. Hung out a few times, perhaps, but it was never meant to go anywhere. Months later I ran into him and his pregnant girlfriend at a restaurant and didn't feel too badly about having moved on with my life.
on 1/22/2009

Came over from Mama Kat's - great take on the prompt! Didn't that guy know how crazy expensive movie popcorn is??

Good lesson!! Everything happens for a reason!!

I found you from the mr. linky at the writers workshop. I think that popcorn was more expensive than the movie tickets even back then. Don't you love it when people show you right up front what they are like? I love the pictures you selected. They are perfect for your post.

Ah! The lessons of youth. If the guy was that selfish with a tub of popcorn, imagine how stingy he would be with his paycheck toward that pregnant girlfriend. I bet he left her and ended up a deadbeat dad.

Click on my name to read my story: BLIND BLIND DATE.

Stoppin' by from Mama Kat's - what a cute blog you have! This is a great story. But, what a JERK! Hello! I'm sure his treats cost more than the tickets. Good call on not sticking with that idiot.Oh, and I love your Anne Taintor pic about the muffled screams. Her stuff CRACKS me up, and I've got a couple of her things on my blog, too.

Very funny - those are the kind of situations that nightmares are made of. My sister had a similar situation - only the guy took her for fast food - paid for his and then left her to order her own. She tought it was some kind of date and had no money with her. She can't look at the guy to this day.

What a stingy jerk! Good thing you were smart enough to get rid of him. When I was younger that may not have been a big enough red flag. Now that I am older, something like that is definitely a deal breaker.