I find myself getting tired of the animal turnaround posts on my blog.  Are you?

I really don't want to do it again, but it would be weird if I overlooked it completely, so here's a quick synopsis.  Hopefully I don't come off as thoughtless and heartless, but rather...succinct.

Our sweet dog, Marley, fell ill last fall.  Over time he began having trouble standing, and then walking, and by December we were carrying him outside to do his thing.  We assumed it was his arthritis taking a serious hold.  It broke all of our hearts, but we finally picked a day and, as a family, we took him to our vet's office.

The crazy thing was that as soon as we put him and his bed onto the table, he perked up!  He sat up, wagged his tail and looked delighted to see all of us!  As if we'd finally taken him to where the real party was or something.  We spent a good 20 minutes just hanging out with him and loving on him, and I told him that if he could get up and walk out of there, he'd be coming home.  But of course...

When the vet came in he noticed Marley had a bit of a twitch, and I mentioned it had started several months back.  He then suggested that it was in fact neurological, and he suspected Marley's inability to walk was likely a tumor on his spine.  That explained a lot.  Our sweet guy went through a lot in his life, including epilepsy with grand maul seizures, and all with just one eye.  I think he found a happy home with us, and we've been missing him ever since. 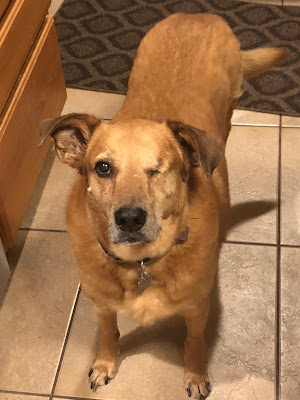 Some time has passed and we found that we weren't crying every day, and so you know what happens next.  We started spending time at our usual favorite rescue.  We always think it's going to be therapy, but somehow it always ends up leading to this. 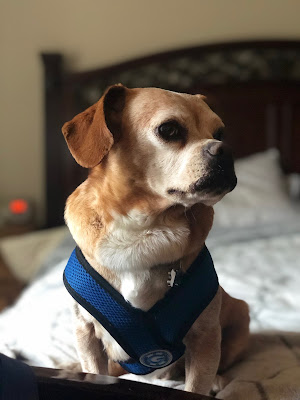 Meet Baxter.  He's a puggle.  (Half pug, half beagle.)  He's small and energetic and refuses to stop peeing on the floor of our loft.  He's super.

Okay, I'm being sarcastic.  I actually really like him and we're getting to know him and he's getting to know us, and it's turning out to be a decent relationship.  We did find out the day he came home that "oops" he's more like eight years old instead of four.  So we have a senior dog who it turns out HATES other dogs and is banned from the second floor.

But seriously -- how can you not fall for this crooked little nose and this serious face?  We laugh with him every day, and I think that's just what we needed. 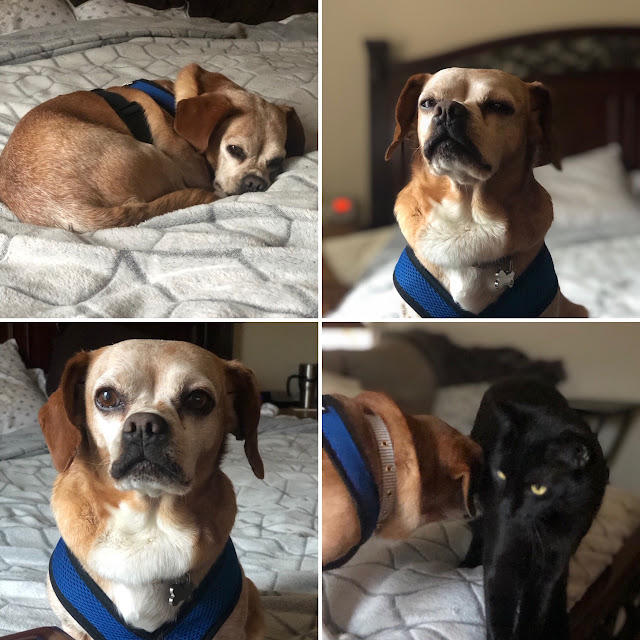 In future posts, we hope to just continually live life and have zero unhappy visits to the vet for a long time.  At least when we call, they've stopped saying, "Oh no..."
on 5/03/2019